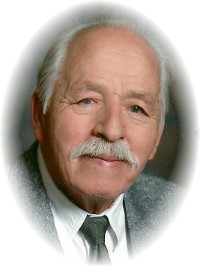 It is with saddened hearts that we, the family, announce the passing of our beloved father and grandfather, Gib Nault, on Thursday, July 25th at East Gate Lodge in Beausejour, MB.

Dad was born on January 30, 1926 in Winnipeg, MB. He spent his early years in Fort Garry in the Fort Whyte area. He resided with Pop and Mom Mercier while his mother, Alice, taught school. Dad was quite an industrious young man. When he was old enough, he delivered water to many of the houses on McGillivray, the Liberty magazine and the Toronto Star. He even delivered groceries for the local corner store. At 16, he left school to work at Canada Cement.

At the age of 17 Dad enlisted in the Royal Canadian Air Force. He served from March 1943 to September 1945. Upon his return from overseas, Dad was discharged and moved north. He worked in Flin Flon, Lynn Lake and Snow Lake in the mines, the blacksmith shop and clearing land. He spent 3 ½ years in Red lake, Ontario working underground in the mines. Deciding it was not the life for him, he re-enlisted with the air force in 1950.

Over the next 22 years, Dad was posted in eight different provinces as a radar operator and was also involved in administrative duties. It was at the Milner Ridge base that Dad met Mom at a Valentine’s Day dance. They were married in 1962. Their first home was a small house next to Russell’s Funeral Home in Beausejour.  The young family of Martha, Gib, Tracey and Derrick next moved to Duluth, Minnesota where they spent two years. The next move in 1969 brought them to Armstrong, Ontario. They returned to Beausejour in 1971, establishing their home in the Golden Bay area.

After retiring from the air force in 1972, Dad held several positions in town, most notably at the Liquor Commission and at Pine Motors. In June 1973, Gib was appointed Clerk of the County Court and Justice of the Peace until 1976 when he was appointed Magistrate. Dad was also appointed Deputy Registrar and Marriage Commissioner. Many weddings were performed at Mom and Dad’s home, with Mom serving as a witness.

Dad performed these duties with great dignity, honor and precision until he retired at age 60 due to ill health. He remained active doing income tax returns for seniors, serving on church council and with the Legion, and volunteering with Meals on Wheels with Mom. He was content to putter around the yard and in his little workshop. His garden tomatoes and cucumbers were always quickly devoured each summer and appreciated by many.

In 1994 Mom and Dad moved into town and lived on Ashton Avenue. Mom entered East Gate Lodge in June 2009 with advanced Parkinson’s. Dad remained her steadfast companion each and every day, arriving to spend lunch and dinner with Mom. Many people, family and friends alike, marvelled at his devotion to her. After Mom’s passing in July 2010, Dad decided it was time to downsize from the house they shared and moved into Armstrong Manor for several months until an apartment came open in Stony Plains Terrace.

Sadly, Dad’s health once again began to deteriorate due to a number of falls in June 2012. He was admitted to Beausejour Hospital and remained there until he entered East Gate Lodge in December 2012. Once again, Dad was surrounded by people who loved and cared for him.

Grateful thanks to Dr. Garth Campbell, Dr. Nick Van Rensburg and the nurses, homecare staff, aides, orderlies, etc. who took such great care of Dad. You are all angels who made Dad feel he was amongst family when we couldn’t be there. Special thanks to Robyn.  Your professionalism and genuine care for Dad was apparent and greatly appreciated.

“Always in our hearts and never forgotten.”

Offer Condolence for the family of Bernard Gabriel (Gib) Nault