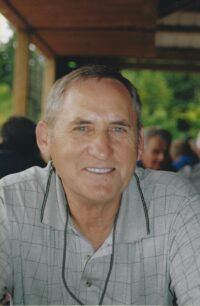 It is with heavy hearts that I announce the passing of Wilbert Schmidtke, my father who passed away on February 18 in Beausejour, MB at the age of 83.

Wilbert was predeceased by his wife and the love of his life Vivian (nee Chikowski) on May 30, 2005.  He was also predeceased by his parents Reinhold and Lydia and siblings Elsie (Louis), Gwendolyn (Karl), Marlene (David), brother Henry and brother-in-law Rudy.

He leaves behind his only daughter Debbie (Bob), grandchildren Corrina (Darcy) and Daniel as well as great grandsons Andrew and Dylan.  Wilbert is also survived by sisters Wilma and Joan (Gordon), sister-in-law Audrey and brother-in-law Roger (Jeanette) as well as numerous nieces and nephews, cousins, best friend and partner Eva Skiba and many other good friends.

Wilbert was born in Steinbach and was raised on the family farm.  He met Vivian at school where she caught his eye the first time he saw her and eventually convinced her to marry him.  Together they moved to Winnipeg where they settled down and had their only child, Debbie.  Wilbert retired early from his job with the City and he and Vivian relocated to Beausejour where they travelled and spent much time outdoors.  They enjoyed boating, waterskiing and fishing as well as camping, snowmobiling and playing cards especially during their winter retreats to Texas.  Wilbert was a Master Angler in several categories of species and loved to share his experiences with anyone who would be interested, even some who weren’t.  In his later years when mobility became more difficult Wilbert relocated to a manageable condo where he enjoyed watching his favourite TV shows and especially cursing out Judge Judy when he didn’t agree with her verdict.

I would like to thank my daughter Corrina and son-in-law Darcy, Bob Ready and my dad’s neighbour Margaret for their love and support of my dad in his last weeks.

A private family memorial service has been held.

In lieu of flowers donation can be made to the charity of your choice.

Offer Condolence for the family of Wilbert Edwin Schmidtke