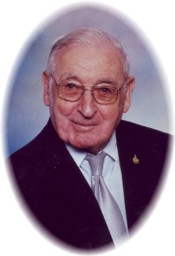 He was born in Dugald, MB on February 26, 1921 to Alexander and Catherine Pearcy. He lived in Dugald till he joined the Royal Canadian Air Force and served overseas for 4 years during World War II. He returned home and worked for the City of Winnipeg Waterworks for 36 years and enjoyed retirement for 28 years.

He married his wife of 62 years Annie May Ingram and they moved back to Dugald in 1950 with their daughter Sharon, followed by Brenda and Ronald. He enjoyed a very full, active life and was very involved with the young people in the area with 4H, skating parties, teen dances, square dancing. He also enjoyed snowmobiling and square dance calling at clubs in Winnipeg and in the area. Later in his life he enjoyed playing and entertaining others with his harmonica and accordion. He really enjoyed hosting camperees for 21 years at his cabin in Lee River when friends and family parked trailers and tents and boated for a weekend of outdoor fun. He built their own homes in Dugald, Lee River and at age 76 he built their home in Harlingen, Texas.

He was a Mason with Beaver Ionic Lodge #25 for 62 years, a Shriner with Al Amin Shrine of Corpus Christie, Texas for 4 years and a veteran of Royal Canadian Legion #9 for 63 years.

He is survived by his wife Annie; daughter Sharon, her three sons Trevor; Ryan and wife Marcy and their daughter Elise; Cory; daughter Brenda and her daughter Kristina and Mike and their three children Kaydan, Mikeal and Thyme; son Ronald and wife Dianne and their three children Mandy-Lee and Andrés, Justin, Katlynn and friend Charles. He was predeceased by his parents Alexander and Catherine Pearcy, brother Vivian and his wife Kathleen and son in-law Kenneth McLachlan.

Interment will follow in the Transcona Cemetery after a lunch and gathering at the Brokenhead River Community Hall. Pallbearers will be Trevor McLachlan, Ryan McLachlan, Cory McLachlan, Justin Percy, Donald Ilchyna and Craig Zacharias.

In lieu of flowers, donations may be made to a charity of one’s choice.

Offer Condolence for the family of Wilbur Dryden “Bob” Percy