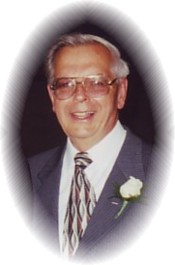 On Sunday May 29, 2011, at Beausejour Hospital, Bill passed away peacefully with his family at his side. His memory will be cherished by his beloved wife Mary, his sons Richard (Monica), Andrew (Grace,) and Evan (Leanne), his eight grandchildren and brother Albert, as well as extended family, colleagues and friends. He was predeceased by his sister Ruth.

Bill was born in Winnipeg, Manitoba in 1929. Following a one year teaching stint after high school, Bill entered law school at the University of Manitoba and was called to the bar in 1954. He then embarked on a 47 year career practicing law in the community of Beausejour, Manitoba. Bill was appointed to Queen’s Council by the Lieutenant Governor of Manitoba in 1969.
An active community leader, Bill is a past president of the Beausejour Junior B Comets Hockey Team, was Chairman, Works and Operations for the 1988 Manitoba Summer Games, and was active in the Beausejour Chamber of Commerce, the Canadian Power Toboggan Championships, and the Liberal Party of Canada. He was also active in the administration of Beausejour United Church of which he was a longtime member.

Bill was best known for the knowledge and caring advice he provided to so many who sought him out. He was charitable with his time and talents, and was committed to helping people regardless of circumstance.

His lifelong enthusiasm for music was enjoyed through playing the piano and singing with the Winnipeg Male choir and Beausejour United Church choir.

With a love for travel, Bill and his wife toured throughout Europe, South America and Australia. His greatest pleasure however, came from spending time with his children and grandchildren at the cottage and on numerous family vacations. He was a supportive father and grandfather who through his honesty, integrity, commitment, caring and love provided a strong foundation for his family.

His family would like to thank the doctors, nurses and staff of the Beausejour Hospital and the Homecare Workers for their compassionate and professional care. In lieu of flowers, a donation may be made to a charity of your choice.

A memorial service will be held on Saturday, June 4, 2011 at 11:00 a.m. in the Sobering Funeral Chapel,1035 Park Avenue E., Beausejour, with Rev. John Robertson officiating.