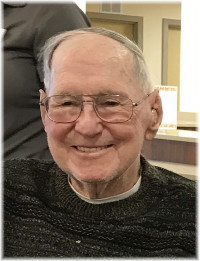 It is with heavy hearts that we announce the passing of our beloved husband, father, grandfather and great-grandfather, William (Bill) Boyer, on Monday, December 10, 2018, at the age of 93, at the Grace Hospital in Winnipeg, Manitoba.

Left to cherish his memory is his loving wife and best friend, Connie, whom he loved dearly; his children, Rory (Nancy), Kathy (Garry), Bill (Linda), Dan (Donna), Craig (Tracy), Susan (Keith), Tim (Louise) and Janice (Andre); 20 grandchildren and 23 great-grandchildren; his sisters-in-law Helen and Marline Petersen; many nieces, nephews and friends.  Dad was predeceased by his grandson Robert in 2009.

Dad was born on November 29, 1925 in Comber, Ontario, the fifth child of Fred and Eliza Boyer.  The family lived in many places in Ontario as Fred found work, but Comber was always considered home.  Although raised in the depression, he had many fond memories of his early childhood with his four older sisters.  One of his most cherished memories was his mother teaching him to read as a very young child.  As the family grew older and started families of their own, there were many trips between Manitoba and Ontario we were blessed to make and maintain those relationships with our aunts and cousins.  Family was very important to Dad and he maintained close family ties with his sisters and their families throughout his life.

Work brought Dad to Manitoba where he met the love of his life, Connie Petersen.  They married on May 17, 1952 and spent the next 66 wonderful years together raising their 8 children and enjoying life.  Dad worked for Manitoba Hydro up to his retirement and spent the majority of his tenure in Great Falls.  He was involved in the building and commissioning of the Pine Falls and Jenpeg Generating Stations and the major overhaul of the Grand Rapids Generating Station.  Dad was an avid baseball player and was inducted into the Manitoba Softball Hall of Fame in 2014 with the Pine Falls Canadians Men’s Fastball Team.  Dad was the first pitcher in Manitoba to pitch the windmill style of pitching and it earned him the nickname “Spider”.  Dad also loved curling and was deeply involved in the Great Falls Curling Club, from teaching his children the game to making ice and maintaining the curling rink.  Dad also enjoyed hunting and fishing, especially with his sons and grandsons.

A celebration of Dad’s life will be held at 2:00 p.m. on Saturday, December 15, 2018 at Sobering Funeral Chapel in Beausejour, Manitoba.  In lieu of flowers, donations may be made to the Parkinson’s Society, 7-414 Westmount Drive, Winnipeg, MB R2J 1P2, or to a charity of choice.

Offer Condolence for the family of William (Bill) MacKenzie Boyer