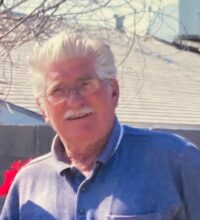 Bill passed away peacefully with his wife by his side at the age of 82.

Bill’s hard work ethic began as a young boy helping his dad after school.  This was the main influence behind his occupation as a talented mason, owning and operating Relf Plastering & Bricklaying for many years.  His artistic creations can be seen throughout Beausejour and the surrounding area.  His love of nature called upon him to start another business with his lifelong friend and work companion Richard Rogoski, cutting pulp in Bissett for many winters.

Through their love of Square Dancing, dad & mom had the opportunity to travel across Canada with lifelong friends Cas & Marylou Szajewski.  They continued their vacations to many destinations around the world.  Later in life they enjoyed their winter home in Arizona, hosting many family members and friends, both old and new.

A pillar of the community, Bill never hesitated to offer his helping hand to many organizations and people throughout the years.  As an Elder of Grace Lutheran Church, he was an active member in keeping it operating.  Early years as President of CPTC, to later years wherever his help was needed.  If you couldn’t find Bill behind the plate umping at any ball diamond both local and afar, he was enjoying his time at the family cottage on Lee River.

He was very proud of his children and grandchildren.  He loved when his whole family was able to be together and his great grandchildren brought a special smile to his face.  Seeing his family continue to grow meant the world to him.

Funeral services will be held on Tuesday, August 30th at 10:30 a.m.  Sobering Funeral Chapel in Beausejour, luncheon to follow.  In lieu of flowers, donations can be made to the Brokenhead River Community Foundation.

Offer Condolence for the family of William Clement George Relf