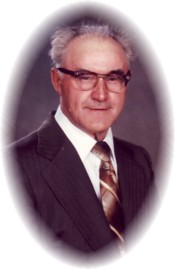 William (Bill) Schindel passed away peacefully at home on Monday, March 8, 2010, at the age of 94. He will be sadly missed by his wife Margaret and three children: Edwin (Beverly), Reinhold (Louisa) and Evelyn (Douglas). William will also be sadly missed by his grandchildren: Rhonda (Gary), Ronald (Marivic), Cindy (Warren), Gerald, Sean, Bradley, Kyle and Katrina, as well as 7 great grandchildren.

William was born on August 27, 1915 in Friedensfeld, MB to August and Emma (Reske) Schindel. Emma passed away during the influenza epidemic at a very young age in Friedensfeld. In 1921, the family moved to Green Bay, MB where Dad continued to worked on his father’s farm until he met and married his wife of 63 years, Margaret (Rosin).

As a young couple, Bill and Margaret moved near Rennie, MB where Dad worked for the railway. They then moved back to Green Bay and purchased the land that they made into their home. Many winters, Dad would work in bush camps to make lumber in order to build their barn, their house and other buildings on the farm.

In lieu of flowers, if friends so desire, donations in memory of Bill may be made to Canadian Evangelism, Mountain & Andrews All Nations Seventh Day Adventist Church, 377 Andrews Street, Winnipeg, MB R2W 4T6.

Offer Condolence for the family of William (Bill) Schindel