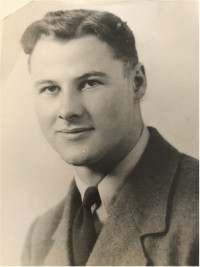 William Albert Sharpe (Bill) was a man of unique wit, predicable unpredictability and deep integrity. His adventurous spirit took its final journey on March 4, 2019, one week before his 97th birthday.

Bill, born in Carman, Manitoba to Mae Victoria Clark and George Edward Sharpe, was the third oldest in a family of 8 children. At the age of four the family moved to Pine Falls, where Bill made his home for most of his life.

Bill joined the RCAF in 1941 and, though he experienced many losses, he also came home stocked with a kit full of stories to share. His outward demeanor was as a man’s man, known for teasing, hard work and stoic behavior. To all who knew him well he was first and foremost a family man.

He married Marion McCulloch in 1948. Through 70 years of marriage they committed themselves to each other and to their children, grandchildren and great-grandchildren. To his children, he was larger than life, always keen to take them on another escapade or give them a new experience. He had a special place in his heart for the elders in his life – aunts and uncles, members of the community – and he would drop in for visits often with produce from his over abundant garden.

Bill proudly worked for the Abitibi Paper Company as a machinist and millwright for over 30 years. In 1970, the call of adventure and work took Bill, Marion and their two youngest to the Philippines for two years. Upon their return to Canada Bill undertook employment in Fort Frances, Stephenville, and then finally back to Pine Falls until his retirement.

The thought of retirement did not sit well with Bill so he decided, with the support of Abitibi to walk from Pine Falls to Grand Falls, Newfoundland. On April 1, 1987, he headed out with Marion at the wheel of a large motorhome. He walked 20 miles a day, 5 or 6 days a week and reached his destination 2800 miles and 7 months later.

Over the years of his retirement Marion would often hear the words, “I’ve been thinking” and they would be off on another grand or small adventure. To the end he was a man on the move, eager to engage life one more day.

Marion predeceased Bill by four months. His children Gaye (Keith), Kim (Lynn), Kelly (Joyce), Bill (Donnalee), Tracy (Raymond) will miss their dad and are filled with gratitude for his life. His grandchildren – Christie, Robin, Sara, Megan, Caleb, Jennifer, Jeremy, Danny, Larry, Billy, David, Michael, Patrick, Mackenzie, Tess and Adam- will miss their papa. The 16 great-grandchildren (and two on the way) will hear many a story about their old papa in the years to come.

Thanks to the staff at the Pine Falls Regional Hospital for the patient and tender care Bill received over the last nine months.

A celebration of life will be held at Pine Falls United Church on Saturday, March 16 at 1:00 p.m. with a reception to follow at the Pine Falls Royal Canadian Legion. Donations in Bill’s name can be made to the Alzheimer Society of Canada.

Offer Condolence for the family of William (Bill) Sharpe