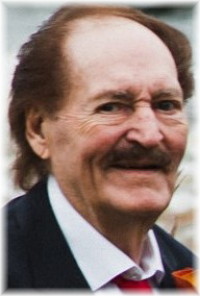 Bill’s love for music was strong throughout his 91 years of life. His family were all musically talented and because of this he learned to play guitar which would eventually become his life’s passion. His first actual job would be for Adelman’s Paper Boxes though, delivering beer boxes to breweries. While living in his hometown of Moosejaw he also played in his family band. However, he would soon follow an opportunity to Winnipeg. This is where he became a member of the CKY Playboys. The band would tour the province as well as earn themselves a regular spot playing music on the radio with CKRC Studios and regular shows at Rainbow Dance Gardens.

His love for entertaining would put him at Patterson’s Ranch House for a gig and this would spark a new love. Her name was Ann. Together they would build a life full of adventures. Bill would marry Ann in 1952, have two children and continue to live and play music in Winnipeg. Eventually he started playing solo. He would load up his electric drummer and tour wherever his agent would book him, playing songs from Presley, Sinatra, Haggard and Cash just to name a few. Sometime in the late 1950’s he was asked to move to the United States to play there. He always talked of almost appearing on the Ed Sullivan show with Neil Diamond but he didn’t want to move to the states. Another time, a booking had asked for two players in the band so Bill taught his son a few chords on bass guitar and they played a two week stint together. Bill was a guitar genius and could easily make the father son duo sound like they had played forever. Not only did he love music but he loved his animals. He had three horses that he kept in Matlock and they would ride them along the beaches. And a parrot who loved to talk and sit with him outside.

In 1977 Bill and Ann would start a journey at the Tourist Hotel in Seven Sisters Falls. He would live, work and entertain there for the next 43 years. Bill loved vacationing in Hawaii so much that they would go for a month at a time. Once they drove a motorhome to B.C. then down to Las Vegas. He was a betting man and would bet against any Winnipeg sports team no matter who they played against. Famous for his button down shirts and suave enough to hand you a twenty in a handshake. The one to say grace for family dinners and believe in good luck charms. If there was ever a moon that lit up the sky he would call his granddaughters so they wouldn’t miss it. He was forever a dreamer and believed anything was possible. The moon and stars inspired him, his wife adored him, his family brought him joy and his many angels gave him peace.

It wasn’t his years that solely contributed to feeling old lately because at 90 he was still sharp with wit and could move with ease. Unfortunately our dear dad had fought an unknown battle with cancer. He remained at home until just days before his passing.

And now the end is here. And so I face that final curtain. My friend I’ll make it clear. I’ll state my case, of which I’m certain. I’ve lived a life that’s full. I traveled each and every highway. And more, much more. I did it, I did it my way.

Forever in our hearts, until we meet again.

An informal celebration of life will take place with a few family and friends at a later time.

Offer Condolence for the family of William Bruce Dunlop