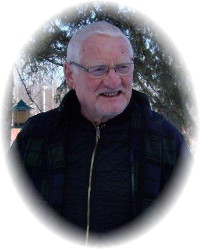 Bill passed away peacefully with his family at his side on Tuesday, September 17, 2013 at Beausejour Hospital.

He loved fishing, from learning at home with a hook on a poplar stick to later working in the “Radish Patch” and every Wednesday going fishing with his boss-later purchasing  the boss’ boat and taking his family fishing.  He especially enjoyed taking his granddaughter Mackenzie along (especially when she bellered out, “I got another one grandpa!”  He didn’t even have a chance to get his rod in the water.)  Beresford was a very special place to us.

He loved the bush.  He and his skidder, his prized possession, produced many cords of wood.  His winters were spent in Bissett where he cut pulp and hunted for moose, of which he held many certificates for.  He was also introduced to curling where he and his Bissett pulp cutting cohorts won a fly-in fishing trip.  One of his fondest excursions.  A blast was had by all!

He loved nature and spent a lot of time going for Sunday drives, looking for blueberries, looking to see some wildlife and just enjoying the outdoors.  He loved to pick cranberries and chokecherries and would come home and have mom make jelly.  She will miss that even though, at the time, it seemed such a chore!

He was involved in many community events.  He served on the St. John Lutheran Church and Cemetery Board for many years.  For over 50 years he and mom sat in the same pew, in the same spot, most every Sunday.  The empty spot will be noticed and he will be missed by all.  He was an active member of the Brokenhead Ag Society and bartended at the “Over 50 Club”.  He was always there to lend a helping hand.

He especially enjoyed playing cribbage with many close friends.  They will surely miss him dearly.

His grandchildren Mackenzie and Alexis were two bright spots in his life and he loved them dearly.  They always seemed to bring a sparkle to his eyes.  They held a very special place in his heart.

Our family would especially like to thank Dr. Schmidt and the staff at the Beausejour Hospital for all their special care and compassion.

Cremation has taken place and a private family service has been held.

In lieu of flowers, donations in Bill’s name can be made to CancerCare Manitoba, Manitoba Heart & Stroke Foundation or to a charity of one’s choice.

Offer Condolence for the family of William H. Loeb