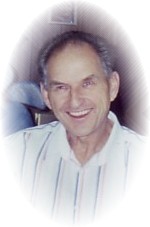 Mr. Bill Hladki, aged 75 years, of St. Georges, MB, dearly beloved husband of the late Doris, peacefully passed away with his family by his side on Saturday, March 6, 2010 at Pine Falls Health Complex.

Bill was born in Landerville, MB on August 14, 1934 and remained in the area his entire life. He met and married Doris, his wife of 44 years and they raised their family on the farm at Maple Creek. Bill worked hard at various jobs, retiring from Manitoba Hydro in 1996. Over the years he enjoyed travelling, snowmobiling, gardening and spending time with his family.

The family would like to thank the doctors and staff at the Pine Falls Health Complex. With his stays you became our second family and an audience for his dry wit.

In lieu of flowers, if friends and family so desire, donations in his memory may be made to CancerCare Manitoba, 675 McDermot Avenue, Winnipeg, MB R3E 0V9.

Offer Condolence for the family of William Hladki