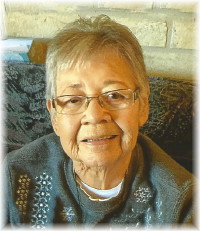 Peacefully in her sleep on Monday, April 18, 2016 Winnifred passed away at St. Boniface Hospital at the age of 73.

She was predeceased by her parents Edna and William Henry (Harry) Phillips, brothers Lionel, Henry and Mike, sisters Carol and Merle.  She will be lovingly missed and remembered by her husband Alojz (Louis) of 55 years, her daughters Sylvia, and Dawn (Barry), granddaughters Dallas, Morgan, Miranda (Nick) and great granddaughter Elaina, sisters Linda (Leo), and Gerldine (Ray), brothers Archie, Brian, Stuart (Sue), and Robert as well as many nieces and nephews.

Winnie was born in Selkirk and raised in Manigotaggan.  She moved to Bissett where she met the love of her life and they got married in 1961.  They later moved to Lynn Lake, Werner Lake and settled in Lac du Bonnet and have made this their home since 1969.

Family was everything to Winnifred.  She was a homemaker for many years before venturing out of the home to work.  Time spent with her daughters and granddaughters meant everything to her.  She enjoyed the times where they would talk and have sleepovers.  Recently she became a great grandmother and enjoyed spoiling her new great granddaughter.  These were precious times for her.

The family would like to thank the staff at Pinawa and St. Boniface Hospitals for their care and compassion.

Offer Condolence for the family of Winnifred Levstek