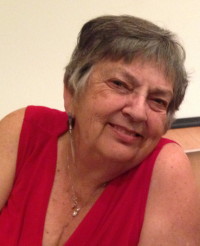 Zonie Sylvia (Matchizen) Smolarski, 71, passed away peacefully on Monday, October 17, 2016 at Selkirk & District General Hospital. She entered the world on April 16, 1945 to John and Katie Matchizen. Zonie married Edward Smolarski on Sept. 28, 1963 and they spent most of their life in the country, living on the Matchizen homestead in Thalberg, MB where they raised their family. Zonie and Ed continued to farm as they moved to the Smolarski homestead in Stead, MB. With the children grown, Zonie and Ed decided to move to Beausejour. As Ed’s health declined, Zonie moved to Winnipeg to be closer to him. Zonie’s life revolved around her family. Her happiest moments were babysitting her grandchildren, cheering for them at sporting events, glowing with pride at their recitals, or spending time with family and friends at the lake. Zonie was proud of her community and always enjoyed being with others. She was known for her friendliness and always had time for anyone who wanted to chat or share a coffee.

Zonie was predeceased by her husband Edward, her parents, John and Katie, her brother Bennie, and her sisters Mary and Elsie. Zonie will be fondly remembered and sadly missed by her sister Jean, her children, Myron (Teresa), Tammy (Terry), Anthony, and Christine (David); her grandchildren, Cody, Samantha, Melissa, Conner, Nicholas, Joshua and Jordan, as well as numerous friends and family. Zonie’s family would like to thank the staff at Selkirk & District General Hospital and Seven Oaks CancerCare for the care and compassion they provided Zonie and her family in their time of need.

In lieu of flowers, donations may be made to CancerCare  Manitoba.

Offer Condolence for the family of Zonie S. Smolarski