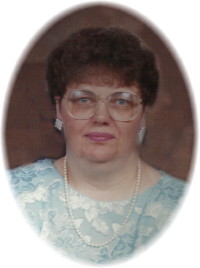 Peacefully on Sunday, July 27, after a battle with pneumonia, the angels wrapped their arms around our mother to take her home.

Adele is survived by son Garnet Weedmark and daughter Margurite (Reg) Thiessen and granddaughter Kelsey.  She will be remembered by her twin sisters Elaine (Wally) Smith and Diane (Albert) Bangert as well as her sister and brother in-laws, nieces and nephews, cousins and godson Ron Keilback.

She was predeceased by husband, Garnet in 2012, brother Allan and parents Albert and Marguerite Lachowski, stepmother Josephine and great niece Hannah Bangert.

Mom enjoyed working in her godfather Marion’s restaurant at age 12 which later became the Gateway Restaurant.  After graduation from Beausejour Collegiate she ventured on her career with MTS as a telephone operator in Sanford.  Soon she was transferred to Beausejour where she met and married Garnet.  Following her career as an operator she began work at CFS Beausejour and later at CFB Wing 17 for over 30 years.   In between her children she also worked at Sheranne then Lee’s restaurants and various caterers in the community.

Adele was committed to giving to her Church and community and volunteered many hours.  She was a Catechism teacher, belonged to choir and CWL at St. Mary’s Church.  She was active as a 4-H leader at both club and district levels and even got her umpire certification to volunteer for Garnet’s baseball club.  Education was important and she loved taking further education and was always proud of the fact that she skipped a grade in high school.

We loved this vibrant, energetic woman with a generous heart and will miss her dearly.

Thanks to the Beausejour Hospital and East Gate staff for all their care and kindness to mom.

Funeral Mass will be celebrated on Saturday, August 2 at 10:30 a.m. at St. Mary Roman Catholic Church, Beausejour.  Prayers will be said on Friday, August 1 at 7:00 p.m. also at the church.

In lieu of flowers, donations can be made to St. Mary’s Building Fund, to East Gate Lodge or to the Hospital TV Fund.

Offer Condolence for the family of Adele Weedmark (nee Lachowski)