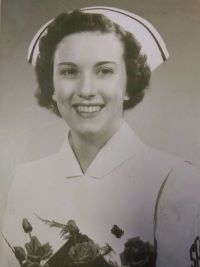 It is with broken hearts we announce the passing of our beloved mom, grandma, aunt and friend, Aileen Frain at the Beausejour Hospital on Friday, January 22, 2021 at the age of 86.

She was predeceased by her husband Jack “Red” of 47 years in 2004, her parents Edgar and Louisa as well as her three sisters.

She is survived by her six children: Bruce (available), Patricia (Peter), Maureen, Barry (Cathy), Katherine (Dennis) and James (Kim), along with 13 grandchildren and numerous great grandchildren.  In addition, she leaves numerous nieces, nephews and friends.

Mom was born in Gypsumville on October 27, 1934.  She grew up on the family homestead.  At the age of 16 she moved to Winnipeg with her sister and began her first job at Woolworths.  Within a year she began her nursing training at St. Boniface with the Grey Nuns.  After completing her training she met a handsome patient who later became her husband.  The couple married in 1957 and started their family in St. Vital, then moving to Navin to raise 6 children.  In 1972, the family moved to Ross, MB and became farmers.  Mom became a proficient midwife on the farm, all the while maintaining her nursing career at St. Boniface, then moving her career to Villa Youville in Ste. Anne, MB where she practiced for 22 years.  At the age of 60 Mom retired and moved to Beausejour to be closer to family.   She enjoyed her retirement surrounded by family and friends.

Cremation has taken place and a Celebration of Life will be held at a later date.

Offer Condolence for the family of Aileen Louise Frain