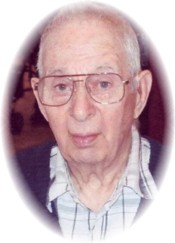 It is with great sadness we announce the passing of Albert Lavoie on April 9, 2010 at the age of 87.

Albert was born in the R.M. of Lac Du Bonnet on May 30, 1922. He served in the army from 1943 to 1946. He then came to the Pine Falls area and was employed at the paper mill (Abitibi) for 37 years (1946 – 1983). His passion was by far his music, which made the Lavoie Brothers a popular venue at many weddings and other social affairs. His joy was also the children and they all loved his wonderful sense of humor that Pepere was famous for. When retired he became the mailman, the grass cutter, the “taxi” driver… and he always had time for a visit.

Albert spent his last two years at Foyer Valade Personal Care Home. The family would like to extend special thanks to all the wonderful staff for their kindness and patience.

Funeral Service will be held on Tuesday, April 13, 2010 at 1:00 pm at the Notre Dame du Laus Catholic Church, Powerview with Fr. James Gray presiding. Prayers will be said at 12:30pm.

Offer Condolence for the family of Albert H. Lavoie