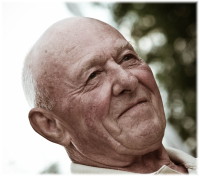 Suddenly and so very unexpectedly on January 29, 2016 with his grandson Chris and his daughter Arleen by his side, our Dad/Papa passed away.

Dad was predeceased by his wife Gloria, his daughter Cheryl, his parents Julius and Katie, brothers: Bob (Charlotte), and Hilbert (Izzie).

Dad was born on December 9, 1932 in Empress, Alberta, the family moving to Shelley, MB, and eventually settling in River Hills, MB.  This is where he met and married the love of his life Gloria.  Together they made River Hills their home, and then moved to Seven Sisters where they raised their daughters.  Dad began his lifelong career with Manitoba Hydro in 1956, retiring in 1987.  He was a devoted family man and always enjoyed the company of family and friends.  Family gatherings meant everything to him, he loved the company of his grandchildren and great grandchildren.  Dad loved country music; it didn’t matter when you went into his house, he either had his music on, or wrestling.  Fishing, hunting, gardening, curling, or watching wrestling; Papa always had a story to tell.

Memorial Service will be held Thursday, February 4, 2016 at 1:00 p.m. at Sobering Funeral Chapel, with family interment to follow at the Whitemouth RM Cemetery.

Many thanks to Dr. Garg, Nurses Jackie, Brenda and Anita at Pinawa Hospital.

Offer Condolence for the family of Alex Norman Honkey