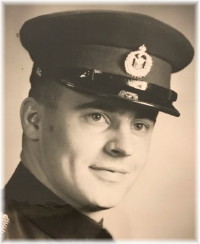 It is with heavy hearts that we share that Alex (Alexander) Romanishen; Husband, Father, Grandfather and Great Grandfather peacefully passed away at his home surrounded by family on April 3rd, 2020.

Alex was born in Golden Bay, Manitoba on May 7, 1939 and was raised on the family farm in Seddons Corner along with his sister, Nettie and three brothers; Daniel, Samuel and Joseph.

It was at the age of 16 that Alex left the family farm to try to make his way in the world and, shortly thereafter, joined the Canadian Armed Forces. When his tour of duty ended in 1959, Alex met Doreen Bachman and, after a short courtship, Alex married the love of his life on September 3, 1960. This September would have marked their 60th Wedding Anniversary.

Alex began working for Naaykens Transport in 1967 collecting and transporting milk from Manitoba Dairy Farmers, a job he dearly loved. However, in 1968 an opportunity arose that he could not turn down, a chance to take over the family farm. It was from this point on that he began his full time career as Cattle and Grain Farmer, but Alex being Alex, also stayed on with Naaykens working part time, a job he would dedicate service to for 50 years until his retirement in 2017, but even then, he would still pick up odd shifts when Naaykens was in need of a driver.

Alex & Doreen raised five children on the family farm; Cindy, Terry, Darrell, Glenn and Todd. In 1997, after 29 years of farming, Alex and Doreen retired from the farm and built a home in Tyndall. Stemming from his life on the family farm, Alex’s passion for working with the earth and soil continued with his annual planting, tending to and harvesting of his garden at their home in Tyndall.  He took pride in watching his garden flourish and helping Doreen preserve the harvest to be shared with family and friends.

Alex continued to be productive throughout his retirement as that was a big part of who he was. In the summers you could always find him picking wild berries in the forest and strawberries from the local fruit growers, a passion he would share with his family. He also took up the hobby of woodworking. This included building bird houses, wishing wells, Koob games and other wooden crafts for family and friends.

Alex and Doreen enjoyed their retirement attending grandchildren’s sporting and artistic events, hosting and attending family gatherings, and visiting friends and family near and far.  Alex dearly loved his road trips with Doreen and often, at the spur of the moment, would hop in the car and off they would go on another road trip. They enjoyed their life doing the things that they both loved to do, together.

He was a kind man, always ready to lend a helping hand with harvesting or tending to the cattle on his daughter’s farm, assisting his sons with home and yard renovations or helping extended family and friends with anything that fit within his skill set.  Alex was a good friend and neighbour, and when they were in need, he would visit to provide comfort, drive them to their appointments and help in anyway he could.

One of Alex’s favorite things to do during the evening was to listen to his collection of classic 8-tracks in the basement with Willy Nelson being his favorite. Alex was quick witted, loved to crack jokes and laugh with those around him. He often enjoyed relaxing while listening to old-time music or watching classic comedies and games shows.

Alex’s Memory and Love will be held in the hearts of his wife, Doreen, his daughter, Cindy (Son-in-law Clarence) and their children, Jeff (Toni); Candice (Matthew); his son Terry (Christine) and their children Jade, Ridge, Michael and Ariel; his son Glenn and his child Carrie (Shawn); his son Todd (Tammy) and their children Tiffany, TJ and Tianna; as well as all his great grandchildren Braeden, Amber, Hayden, Clarrissa, David, Ruby, Everly, Milaya, Amelia, Lincoln and Kenzie.

Alex was predeceased by his second born son, Darrell, his mother, Lena (nee Hrabrchuk), his father, George and his brothers, Daniel, Samuel and Joseph.

It is with heart felt thanks that the family would like to acknowledge the professionalism and kindness of the staff of the Interlake-Eastern Regional Health Authority – Home Care, Palliative Manitoba, the Selkirk Regional Health Centre, the St-Boniface Hospital and Veterans Affairs Canada.

In lieu of flowers, donations in Alex’s name can be made to: Toggs N Treasures, 730 Park Avenue, Beausejour MB R0E 0C0

Those who we love

They walk beside us

So loved, so missed,

Offer Condolence for the family of Alexander (Alex) Romanishen