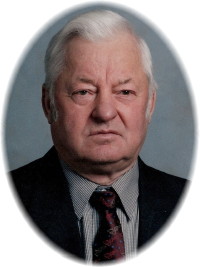 It is with great sadness that we announce the passing of Alex Rattai at the Beausejour Hospital on June 25, 2014, at the age of 85.

Alex was born in Tyndall, Manitoba on February 27, 1929, and then his family moved to the Green Bay area northeast of Beausejour.  He remained there most of his life, marrying Esther Reske on July 14, 1950.  Alex was a devoted husband, father, grandfather, and brother who would help anyone he could.  He enjoyed farming and was a successful and proud farmer for many years.  He enjoyed hunting, visiting, a good party and had a great sense of humour.  He retired to Beausejour on October, 1994 and spent those years visiting and helping his sons on the farm, and enjoying good times with family and friends.

Alex will be sadly missed by his wife Esther, son Allan (Shirley) and granddaughter Lisa, son James (Suzette) and grandson Riley, and daughter Sharon (Robert) and Robert’s children Joanne and Jason and their families.  He is survived by his brothers Harold (Marlene) and Garry (Barbara), sister in-law Margot Rattai, and brothers and sisters in-law Anne and Eldon Maltman, Henry and Doreen Reske, Edward and Alla Reske, William and Norma Reske, Helen Reske, Dorothy Reske, and numerous nieces and nephews.

He was predeceased by his parents Ferdinand and Rita, his sister Beatrice Hastman, brother in-law Gordon Hastman, and brother Arvid.

Special thanks to Dr. Khan and the nursing staff at the Beausejour Hospital for their excellent care and compassion.

At Alex’s request, no service will be held.

Offer Condolence for the family of Alexander Lawrence Rattai