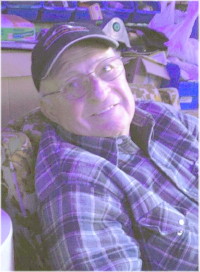 With heavy hearts, we announce the peaceful passing of Andrew (Andy) Nevistiuk, in the wee hours of November 5, 2020, at the Beausejour Hospital, following a long battle with cancer.

Andy was born October 29, 1946, in Inglis, Manitoba. He spent all of his formative years on the family farm in Lennard, Manitoba, where he grew up as the baby of a large loving family. Growing up, Andy was very involved with Air Cadets, which afforded him many opportunities to travel in his early years.

At the young age of 16, Andy moved to Winnipeg where he started working for Domtar Packaging. It was here where he worked with Pat’s aunt, who convinced him to go on a blind date with her niece, whom he would marry the following year. Two children and seven years later, the family moved to Beausejour, which became their home.

Andy was very involved with the Beausejour community, which he loved. Over the years, he was a member of the Lion’s Club, the Arena Board of Directors, volunteered for the CPTC races and assisted with many community events. Andy especially loved spending time with his daughters, which included coaching their Ringette teams for many years. He absolutely loved and spoke very fondly of those years in his life, as he made many lifelong friends and memories that he carried with him.

Andy was very proud of his career working as an electrician, spending many years working at AECL in Pinawa. He was known as the world’s best handyman by those who knew him, as there was very little that he was unable to repair. Following his retirement from AECL, he spent many years performing maintenance for Beausejour CO-OP. Andy was a lover of the outdoors. He especially loved spending time at his family’s homestead and also in his backyard, which he took great pride taking care of. Watching and listening to birds was a passion that Andy found very soothing and enjoyable throughout his life. Andy’s shop was his place of solstice. He could hardly wait for Saturday nights during the NHL hockey season, where he would go into his shop to make a fire, turn on his blue lights, grab a beer and watch the hockey game with Shireen.

The family would like to thank the amazing staff from the Cancer Care team at HSC and Concordia Hospital, the Beausejour Palliative Care team, Dr. Daphne Schmidt and the staff at the Beausejour Hospital. These are very trying times and we are very grateful for the care and support that Andy and our family received.

A private service will be held, with a celebration of life to be held at a later date for extended family, once the pandemic has passed.

In lieu of flowers, if friends and family so desire, donations may be made to the Beausejour Hospital TV Fund.

Offer Condolence for the family of Andrew Nevistiuk