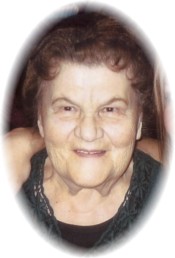 Sadly we announce the peaceful passing of Nellie Chay, our mother, grandmother and great-grandmother at Beausejour Hospital on Wednesday, January 5, 2011.

She was predeceased by her parents and was the last surviving sibling of her family.

Nellie was born in Garson, MB to parents Kazimirz and Caroline Zygarlicki on August 3, 1918. She was raised on the family farm until she married. She moved to Winnipeg in 1959 and worked as a seamstress and then as a garment cutter. She took pride in her work at Harv-Al Sportswear and Shanter Sportswear. She retired 27 years ago and resided in the town of Garson where she enjoyed her large vegetable and fruit garden. She enjoyed sharing her bounty every summer. She spent a lot of her time making perogies (which we think are the best!) and would always be giving us care packages to take home.

Until her recent stroke, Nellie managed her home, her yard and her garden independently. She was a very giving person but had difficulty in accepting gifts. Her life was her children and grandchildren. She was so happy when they came to visit.

In lieu of flowers, donations may be made to the Heart & Stroke Foundation of Manitoba, 200 – 6 Donald Street, Winnipeg, Manitoba R3L 0K6.

Offer Condolence for the family of Aniela (Nellie) Chay