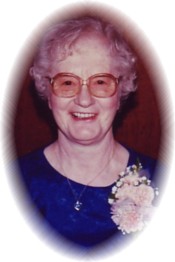 She was born on April 17, 1917 in Thalberg on her parents farm. She was baptized confirmed and united in marriage to Rudolph Buss in the Trinity Lutheran Church in Thalberg. Anna and Rudolph became active members of Zion Lutheran Church in later years. She and Rudolph travelled extensively on vacations and particularly enjoyed bus tours. Anna’s mind and memory were clear to the end. She enjoyed flowers, gardening, knitting, crocheting and puzzling; but she especially enjoyed baking for her family and friends.

Anna was predeceased by her beloved husband Rudolph in 1994; her parents Fred and Pauline; her infant brother Albert; her brothers Harry, Reinhold and John; her sisters Bertha (in childhood), Eda Gabel, Emeline Kurbis, Martha Schirlie, Helen Schiller and Louise Otto; her brothers in-law John Gabel, Bill Schirlie and Henry Kurbis; and by her sisters in-law Edna, Wanda and Augusta.

She is survived by her son Kenneth and his wife Marlene; her brother Alfred Otto (Arlene); her brother in-law Rudy Schiller; also many nieces, nephews and friends.

In lieu of flowers, if friends and family so desire, donations in Anna’s memory may be made to the Zion Lutheran Church Memorial Fund, Box 968, Beausejour, MB R0E 0C0.

The family extends a heartfelt thank you to Dr. F. Zeiler and the staff of the Beausejour Hospital for their care and kindness. A special thanks to Alfred and Arlene for all their care over the years.