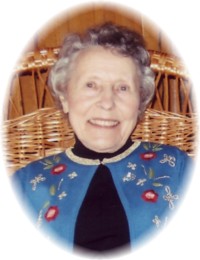 In peace and with God’s loving arms around her, our Mom, Grandma and Great Grandma passed away with family by her side on Wednesday, February 22, 2012 at Betel Home in Selkirk, MB.

Anne went home to be with the Lord at the age of 93.  She was predeceased by her husband Jack (1999), parents Jacob and Emma Leiman, brothers Jacob, George, Fred and Henry and sisters Kay and Marjorie.

Anne was born in Tyndall, MB on March 25, 1918.  She attended Greenwich School in Tyndall and worshiped with her family at Zion Lutheran Church in Beausejour, MB.  At the age of 16, she moved to Winnipeg to work at the Maxwell House Restaurant on Broadway.  Anne met Jack in Winnipeg and married on October 10, 1942.  They lived and worked in Winnipeg until 1954 when they bought a General Store in Garson, MB and operated the business until retirement in 1986 when they moved to Selkirk, where they were members of the Lutheran Church of the Good Shepherd.

Mom and Dad had a love for music, traveling and gardening.

Mom had a real love in her heart for the Lord.  Her strong faith and loving heart sustained her through her life.

We wish to extend our heartfelt appreciation to Dr. Demsas and Dr. Zoppa and to our Betel Home Angels who cared for our Mom.

Offer Condolence for the family of Anne Lawson (nee Leiman)