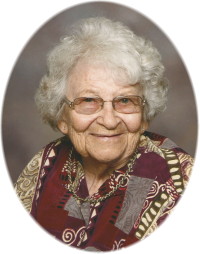 Annie Percy passed away peacefully on Sunday, March 29th, 2015. She was born in Winnipeg MB. She was predeceased by her husband Wilbur Dryden (Bob) Percy and her son-in-law Kenneth McLachlan.

She was raised in Winnipeg until she married the love of her life. They moved to Dugald in 1950 with daughter Sharon, followed by daughter Brenda and son Ron. They were married for 62 years and enjoyed a very full, active life. She was very involved with the young people in Dugald:  with 4H, skating parties, teen dances, square dancing. She also enjoyed handicrafts, sewing, painting, swimming, snowmobiling and Square Dancing with Bob, who called at several clubs in Winnipeg and Beausejour. Later in her life she enjoyed playing dress up with her grandchildren, and entertaining and cooking for them at the cabin. She really enjoyed hosting weekend Camperees for 24 years at their Lee River cabin. Up to 75 friends and family camped, water-skied, and shared great food. She also enjoyed driving with Bob endless hours back and forth from their second home in Texas. She touched everyone she met with her smile, compliments and enjoyment of life.

She is survived by her daughter Sharon and her 3 sons, Trevor, Ryan (Marcy and their daughter Elise), and Cory; her daughter Brenda and her daughter Kristina (3 children Kaydan, Mikeal and Thyme); her son Ron and Dianne and their 3 children Mandy-Lee (Andrés and their 2 children Browen and Rayland), Justin, and Katlynn (Charles and his daughter Gabrielle).

Offer Condolence for the family of Annie May Percy