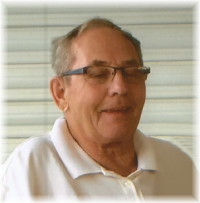 It is with profound sadness that we announce the passing of Ben Brocker, beloved husband of Beth Dyck.  He leaves to mourn his siblings, Sibille Portz, Martin (Anne Marie) Brocker, Vicky (Philip) Baril, Josie Brocker, and brother in-law Dan Toal.  Also mourning his loss are Beth’s family Alice (Gary) Thomas.  Ben held a special place in the hearts of his many nieces and nephews for whom he provided a lifetime of fond memories.  His constant canine companion, Jade, misses him terribly.  Ben was predeceased by his parents Carl and Albertine, his sister Ute Toal and brothers in-law Lloyd Portz and Brian Neal.

Ben was born October 25, 1935 in Saskatchewan.  In 1937 the family moved from drought ridden Saskatchewan to the lushness of the Swan River Valley, in Manitoba, where Ben attended Egremont School.  The family later moved on to the Interlake region.   Ben worked for the Ontario Hydro for a couple of years, then returned to the Teulon area, where he dabbled in farming and plumbing, and eventually went on to an entrepreneurial life of owning his own business of Macleods Hardware Store and land development, in Lac du Bonnet, Manitoba.

Ben and Beth loved to travel and spent many years in their fifth wheel trailer, as snowbirds, in Arizona and Mexico.  In the summers, they enjoyed visiting many parts of Canada.

Ben’s sense of humour was legendary to his family and friends.

The family wishes to thank the staff at Selkirk and Beausejour Hospitals for their care and compassion.

In lieu of flowers, should friends desire, a donation may be made in Ben’s memory to a charity of their choice.

Offer Condolence for the family of Ben Brocker