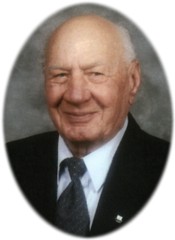 Besides his loving wife Irene, he will be sadly missed by his daughter Diane (Brian MacKay) of Abbotsford, BC, his son Don (Erna) of Steinbach, four grandchildren, two great grandchildren, also his brothers, sisters, nieces, nephews and cousins. He was predeceased by his parents Henry and Helena, his brothers and sisters.

Funeral Service will be held on Monday, April 4 at 2:00 p.m. in the St. Paul Lutheran Church, Steinbach, MB with Pastor David Lowe officiating. Interment will follow in the Steinbach Memorial Cemetery. Friends may view at the church Sunday, April 3 from 7:00 – 8:00 p.m. and at the church prior to the service.

In lieu of flowers, if friends and family so desire, donations in Ben’s memory may be made to the Bethesda Foundation, Box 939, Steinbach, MB R5G 1A3.

Offer Condolence for the family of Benjamin (Ben) Sobering