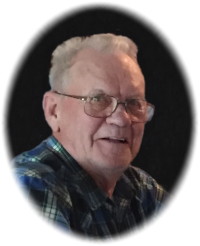 At the age of 79, Bernie Mozil of Nourse, Manitoba passed away suddenly at the family farm where he lived for 72 years of his life on October 16, 2015.

Bernie is survived by his best friend Isabel, sons Terry (Pam) and Devin (Kristeene) and grandchildren James and Azrael as well as his brother Henry.  Also left to mourn his passing is Isabel’s children David (Darlene) and Karen (Chris) and their children Amanda, Andrew and Mitchel, and Gordon (Sherry) and Candace (Ryan).  Bernie is predeceased by his father James, mother Mary and sister Kathleen.

Bernie was born on August 23, 1936 in Beausejour, Manitoba.  He moved to Nourse in 1943 at the age of 7 years old.  In Nourse the family farmed and owned a local store and gas station.  In addition, Bernie sold and serviced snowmobiles and chainsaws. Bernie also was employed with the RM of Springfield for many years.

We will all miss his wisdom, stories and humor including Bernie’s extended family and numerous friends he made over the years.

The family wishes to thank the emergency response folks and RCMP that attended at the farm. In lieu of flowers, please make donations in Bernie’s name to the Manitoba Heart and Stoke Foundation.

A service will be held for Bernie on Thursday, October 22, 2015 at 11:00 am at Sobering Funeral Chapel.  Viewing will take place 1 hour prior to the service.  Interment will be in Queens Valley Cemetery, Nourse, Manitoba

Offer Condolence for the family of Bernard (Bernie) Mozil