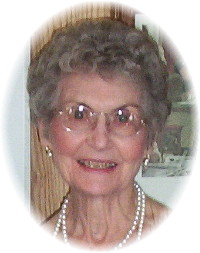 On January 27th, 2015, our mother, grandmother and great-grandmother, sister and aunt passed away peacefully in her room at the East Gate Lodge Personal Care home in Beausejour where she had been a resident since 2006.  The family is forever grateful for the loving care she received from the staff – especially in the Rose Unit.

Born in Winnipeg, Bernie spent her early years in Dunrea and Brandon before moving with her parents and sister to Rivers in 1937. Her first job was as a bookkeeper in the McKenzie Department Store where she met Bob. They were married May 11, 1939. It was a family joke that they no sooner married than World War II broke out. With Bob in service in Ontario and Alberta, Bernie continued her work at the store while raising her son Brian and daughter Susan.

Following the end of the war, a second son added to the family which was to be Bernie’s focus for the rest of her life as she welcomed daughters-in-law, a son-in-law, grandchildren and great-grandchildren.

Both Bernie (Roman Catholic) and Bob (United church) were active participants in their community and their churches. They ran the family department store for forty years before retiring to travel and spend more time at their beloved cottage in Clear Lake.

Bernie will be remembered for her community involvement, love of reading, gardening, bridge and cribbage. Financially unable to go to university she was proud of the accomplishments of her family as each graduated and went on to successful careers in their chosen fields.

Funeral Liturgy will be held at St. Mary Church, 516 Atlantic Street, Beausejour on February 14, 2015 at 11:00 a.m.  A memorial and interment service will be held in  Rivers at a later date.

Charitable donations may be made to the Building Fund, St. Mary Church, Heart and Stroke Foundation of Manitoba or East Gate Personal Care Home, Beausejour.