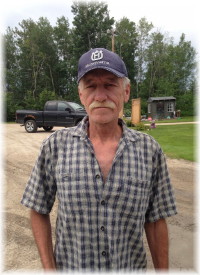 After a lengthy illness, Brent passed away peacefully on August 3, 2020 at the Pinawa Hospital with his brother Laurie at his side.

Brent was predeceased by his father Morris and his Bubby & Gigi, Stella and Mike Buhay.  He is survived by his mother Phyllis and four brothers, Cam (Lorraine), Neil (Kim), Laurie and Todd.  He will be remembered by many nieces and nephews.  He will also be missed by long time friends, Lorne Szmerski and John Kettles, in addition he leaves numerous friends and co-workers at the Millwright Union Local 1443.

Brent was born on December 17, 1957 in Selkirk, MB.  He lived all of his short 62 years of life in Lac du Bonnet.  He worked as a millwright for over 25 years.  Brent loved to cook and bake and share his delicious meals with everyone.  Brent remained a bachelor… I think it’s because he couldn’t find a woman that could cook good enough.  He enjoyed fishing and moose hunting as well, even though he never left the camp.

As per Brent’s wishes, there will be no funeral service.  A private family service will take place at Brightstone Cemetery at a later date.

The family would like to thank Dr. Bruneau and staff at the Lac du Bonnet Medical Group for all their care and compassion shown to Brent.

Special thanks to the staff at Pinawa Hospital for making Brent comfortable in his final days.

Offer Condolence for the family of Brent Lawrence Podolsky