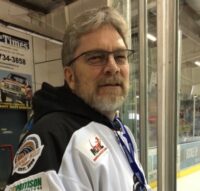 It is with great sadness that we announce the passing of Calvin Gordon Hirst, aged 59 of Lac du Bonnet, MB, on Friday, August 6th, 2021.  Calvin is survived by his partner Georgia Valentonis, and by his son Dane Hirst.  He also leaves his mother, Blythe Hirst, brother Grant Hirst (Kathy), sister Shannon Worona (Randy), nephews Austin Eronen-Hirst, Nicholas Eronen-Hirst, Anthony Worona (Allison and their children Grace and Henry) and his niece Alia Lodge (Bryce and their children Bowen and Isla).  Calvin is also survived by stepson Logan Milne, stepdaughter Marina Milne, many close friends, and a large extended family.  He was predeceased by his father Glen in 2009.

Calvin was born in Beausejour on September 23, 1961, and grew up in Lac du Bonnet, where he continued to reside for most of his life. He trained to become an electrician and was first employed by Sunrise Electric (Kurt Behrendt), and then Urban Electric.  Calvin later worked at both Tanco and Manitoba Hydro.  He retired in early 2020 and enjoyed a quiet but short period of retirement at home with Georgia and their dog Oscar, before being diagnosed with multiple myeloma in July of 2020.

Everyone knew that Calvin’s greatest pride and joy was his son Dane.  Calvin and Sheri’s priority was Dane’s well-being and their co-parenting through the years is a testament to the grounded young man Dane has become today.  Nothing made Calvin’s eyes light up more than being asked about his son.

Calvin enjoyed playing and watching a variety of sports throughout his life, especially hockey.  He coached Dane’s hockey teams for several years.  He was very mechanically inclined and believed that any job worth doing was worth doing well.   He could fix almost anything and enjoyed the challenge of figuring things out.   He referred to himself as a ‘homebody’, and all that were close to him knew he was happy with a relatively simple life.  Calvin enjoyed visiting and he was a loyal and helpful friend to many.  He was honourable, reliable, direct and had a great sense of humour.

Calvin also had a great interest in classic cars. For over 30 years, he owned a 1971 Torino GT convertible, which he spent much time working on and driving.  It was Calvin’s wish for his son Dane to continue to enjoy the convertible for many years to come.

Calvin’s family wishes to thank the staff at Cancer Care HSC and Cancer Care Pinawa.  In lieu of flowers, please consider donating in Calvin’s name to cancer research or to the LdB Arena.

Cremation has taken place and there will be a family interment at a later date.  As per Calvin’s wishes, there will be no formal service.

“Grief is the price we pay for love”.

“We hold you close within our hearts, and there you will remain.  To walk with us throughout our lives, until we meet again.”

Offer Condolence for the family of Calvin Gordon Hirst