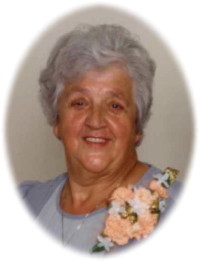 Oma passed away peacefully at her residence at the Whitemouth Personal Care Home on Saturday, November 15, 2014.

Catherina was born on April 30, 1928 in Holland, the 10th child in a family of 13.  After marrying Theo in Holland in February, 1953, they moved to Canada.  They farmed in Little Britain for 8 years.  In 1961 they moved to Whitemouth where they continued  farming with their family until their retirement in 1981.

They enjoyed travelling and spending time with family and friends.  Mom continued travelling after Theo’s passing including a trip to New Zealand by herself to visit her brother. “Katie” could be seen regularly in the commuity riding her bike.  She also enjoyed spending time at the senior’s club in Whitemouth and volunteering at the personal care home.

Smiling was oh so natural to her.  She rarely had an unkind word to say about anyone.  She went through life with a quiet determination to make the best of every situation.

She is also survived by one sister in Holland, one brother in New Zealand and several brothers-in-law and sisters-in-law and many nieces and nephews.

The family would like to express their thanks to the staff at the Whitemouth Personal Care Home for their kindness over the past 3 years.

Funeral service will be held on Saturday, November 29 at 11:00 at Sobering Funeral Chapel, Beausejour.

In lieu of flowers, donations may be made to the Canadian Cancer Society or the Alzheimer’s Society.

Offer Condolence for the family of Catharina Kuypers