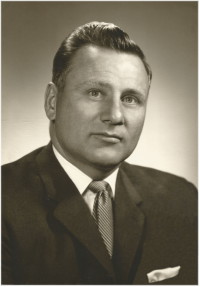 Cecil leaves to mourn his loving wife Sadie; his sons, Mark, Jonathon (Sherry) and their children, Matthew and Shaylyn, and his daughter Sharon (Richard) and their children, Edmund, Beatrice and Marie.  He also leaves his brothers, Clifford and Larry (Ellen); and sister Margaret.

He was predeceased by his parents, Louise and Cecil; and four brothers, Les, Ralph, Galpine and Douglas.

Cecil graduated from Apostolic Bible Institute in 1971 and was active in pastoring and assisting in several Manitoba churches and as a home missionary in Sioux Lookout, ON.

He had a great love of reading books, especially the Bible.  Revelation 21:4 says “There shall be no more pain, for the former things have passed away.”

He was Papa to his grandchildren and a friend to all, with a kind and generous personality that reached out to every person he met.

Many thanks to Arborg Personal Care Home and Rosewood Lodge, Stonewall, for your compassionate care.

In lieu of flowers, donations may be made to Cornerstone Church of Stonewall (Lebanon Missions).

Offer Condolence for the family of Cecil Frederick Dewey