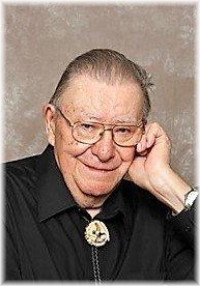 On April 29, 2020, at age 91, Charlie lost his battle with Mesothelioma.  With his wife and family by his side, he said his last goodbyes peacefully.

Charlie was born on a farm near Vibank, Saskatchewan.  He moved to Pine Falls in the fall of 1950 to work for the Manitoba Paper Company as a pulpwood cutter and later hired on to work in the Boiler Room Department as a steam engineer, until his retirement in 1989.

He is survived by his lovely wife of 63 years Christine, three sisters, Katherine (Ed), Gertie (Horst), Anne (Garry) and sister-in-law Shirley (Jim) and many nieces and nephews.

Charlie was the oldest of eight siblings, four of which had predeceased him; brothers Leo (Ella), Louise (George), Elizabeth (Mike) and Jim.  Other family members that predeceased him were his father John, mother Louise, stepmother Rosemarie, baby brother Lawrence and his grandson Joey.

Pine Falls was also where he found the love of his life, Christine (Lesin) and married in 1956.  They raised two sons, Don (Terry) and Jim (Joanne) and he was very proud of them.  They gave them four grandchildren, Gordon (April), Brian (Amanda), Bill (Theresa), Aimee (David) and Baby Joey (deceased).  He is also leaving behind eight great-grandchildren, Ethan, Memphis, Braxton, Abbygail, Louis, Annabelle, Claire and Charlie.

Charlie loved the outdoors and spent many hours hunting and fishing.  His hobbies included taxidermy, knifemaking and carving.  He would have loved to take his grandchildren and later his great-grandchildren to spend time with him in the outdoors, hoping they would enjoy the wonders of nature the way he did, but time goes by much too fast.  He enjoyed watching them grow up and change to young adults over time.

The family wants to say a special thank you to Dr. Bassily, Dr. Clark, Lisa Kemball and all the wonderful Homecare staff for helping keep Charlie comfortable in the last few months.  May God be with you all.

Celebration of life to be determined at a later date.

Offer Condolence for the family of Charlie Niedermayer