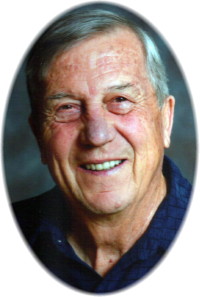 On April 28, 2013 Clifford Kenneth Miller of Belair, Manitoba, husband of Pauline, passed away.

In addition to his wife of 57 years, he is survived by his daughter Rhonda and son-in-law Dan Smith of Thunder Bay, ON; son Darren and Anya Hofmann of Winnipeg; and daughter Heather Dram of Belair.  He also leaves his beloved grandchildren: Joshua and Rebecca Smith, Chelsea and Zachary Dram, Jamie Miller, and Patrick and Evan Hofmann.  In addition, he leaves his sister-in-law Dini Miller of Rockglen, SK, sister-in-law and brother-in-law Margaret and Allan Nelson of Regina, SK, as well as numerous nieces and nephews.

Cliff was born December 31, 1931 at Rockglen, Saskatchewan and grew up on the family farm at Lisieux, Saskatchewan.  He attended high school at the Lutheran Collegiate Bible Institute in Outlook, Saskatchewan.

He joined the Bank of Toronto in Assiniboia, Saskatchewan in 1950, and was employed in various capacities for over 36 years, residing in Regina, Winnipeg, Selkirk, and Thunder Bay.  He retired to his cottage in 1986.  It was while in Regina that he met the love of his life, Pauline (nee Crosson) in 1955.

The Lutheran Church played an important part in Cliff’s life.  He was an active member and leader in the church in all of the communities in which he resided.  He enjoyed singing and was a choir member and soloist for over 65 years.  He served as Treasurer of the Manitoba/Northwestern Ontario Synod of the Evangelical Lutheran Church in Canada, as well as Treasurer of Luther Village.  He also belonged to a number of service clubs, and was recently President of the Senior Scene, Victoria Beach.  Volunteerism was a way of life for Cliff.

A celebration of Cliff’s life was held at Trinity Lutheran Church, Thalberg at 1:30 p.m. on Friday, May 3, 2013 with interment in the church cemetery.  Pastor Mark Koenker officiated.

Donations in Cliff’s memory may be made to the Memorial Fund of Trinity Lutheran Church, Thalberg.

Thanks go to the many health care professionals involved in Cliff’s fight with cancer, our neighbours who were always available to help out, the HELP Centre at the Senior Scene who arranged for drivers for the various appointments and treatments, and the drivers and helpers.  We could not have done everything without all of you.

Offer Condolence for the family of Clifford Kenneth Miller