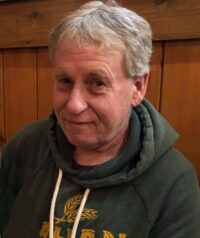 It is with heavy hearts that we announce the passing of Craig Lobban on October 20th, 2022 at the age of 63.

Craig was born November 23rd, 1958, in Hamiota, MB where his love of sports began from an early age. This love led Craig to play baseball, curling, and hockey.  He competed with the Hamiota Red Sox and was fortunate to have his dad Ian, as his dedicated coach.  Craig’s Dad, his greatest fan and support, attended all his baseball, curling, and hockey games.  After graduation, Craig worked for the Province of Manitoba, Department of Highways for 40 years, retiring from Traffic Engineering in 2017.

Craig married Elizabeth (Liz) in 1985, and had 2 children, daughter Amanda, and son Brennan. Over the years Craig would merge his love of sports with his love for his family.

As a dedicated fan of the Boston Bruins and season ticket holder of the North Dakota Fighting Sioux hockey team, Craig and Liz made many trips and memories together.  Much like his father before him, Craig was Amanda, and Brennan’s greatest fan, support, and coach during their junior curling days.  Craig enjoyed many years of competitive curling with teammates and friends from the Tyndall and Beausejour Curling Clubs; The name “Lobban” on the playoff board was a common sight at local Bonspiels.

Craig was an incredibly hard worker, and enjoyed woodworking and landscaping, which was evident in his beautiful yard which he worked tirelessly to maintain.  One of the great additions to his yard was a woodfired pizza oven that he built just in time to host Brennan and Ashley’s surprise wedding.  Craig and daughter Amanda shared a gourmet bond over food and crafted countless woodfired pizzas shared with family and friends.  These memories will be forever cherished.  Many memories were made with his grandson Finn, who had a special bond with his Papa, his first best friend. Craig had a great love for his precious Samoyeds, Neechee, Mi-he-kun and Mishka; and his beloved black lab Marley.

In lieu of flowers, donations can be made to a charity of one’s choice.

A Come and Go Celebration of Life will be held at Sobering Funeral Chapel in Beausejour on Sunday, October 30 from 2:00 – 4:00 pm, with a time of remembrance at 3:00 pm, where family and friends are welcome to share memories and stories of Craig.  The family respectfully asks that if anyone is ill or unwell, please refrain from attending Craig’s Celebration of Life.

Private Interment, by invitation only will take place at the Hamiota Cemetery at a later date.

“Blood, sweat, tears.  No practice tomorrow cause there’s no one left to beat.” Bobby Orr

Dad, this fight is over, it’s time to rest, sweet dreams. Love Brennan and Mandy

Offer Condolence for the family of Craig Lobban