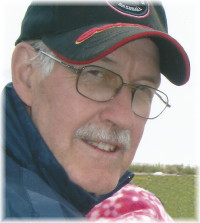 Peacefully, Dan passed into the waiting arms of his brothers on June 18, 2019, at East Gate Lodge.

He leaves behind his wife of 49 years, Judy; his daughters, Natalie (Richard) and their children, Seth and Racine, and Jennifer (Gary) and their children, Konnor and Emma; his brothers, Roy (Carol) and Steve (Joyce); sisters, Gwen (Russ) and Marg (Gerry); brother-in-law Bob Horner (Marni); and numerous nieces and nephews.

He was predeceased by his parents, Archie and Myrtle; his in-laws, Ron and Maxine Horner; brothers, Einar, Harry and Joe; sisters-in-law, Elsie and Evelyn; his nephew Kevin and his niece Noreen.

Dan grew up on the family farm in Amaranth on Lake Manitoba, later moving to Portage la Prairie to become a psychiatric nurse. This is where he met his wife Judy. In 1974, they moved to Beausejour with their daughter Natalie, shortly after Jennifer was born. He became the Eastman Regional Community Coordinator for Developmentally Delayed Adults and Children. He was known as the manger to work with, not for and his no nonsense attitude “Pitter Patter, let’s get at her.” He also enjoyed being a part of the Beausejour Ringette Association and Coop Board.

He loved the outdoors, the fresh air and being with nature; fishing on Lake Manitoba Narrows or Lake of the Prairies and hunting at the family homestead, Birch River or Duck Mountain, with his brothers Joe and Roy, nephew Pat and his best friend Bob. He waited all year for opening day! He played slow pitch with the over 50 team in Beausejour after retiring. You could always count on seeing his friendly face while walking up town or sitting in his lawn chair in the driveway because the house is too cold! Now we know where his daughters get it from.

His grandchildren were the light of his life. He loved to walk with them downtown for the mail and he rarely missed a hockey or ringette game, or anything that they were involved in. They will cherish his memory and miss him forever.

Danny was diagnosed with Parkinson’s and Lewy Body dementia, spending the last few years at East Gate Lodge personal care facility. We would like to extend our sincere appreciation to the staff on both Crocus and Rose units for the care and compassion they provided to him over the last 6 years.

As an expression of sympathy, if friends so wish,  memorial donations may be made to the Parkinson Society of Manitoba or East Gate Lodge.

“I can no longer see you with my eyes,
touch you with my hands,
but I will feel you in my heart forever….”

Offer Condolence for the family of Dan Vernin Almo Bergson