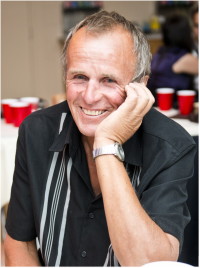 Dennis will be forever remembered by his wife Janet of 43 years; son Kevin, daughter-in-law Lisa; grandchildren Lennon & Weston; his Great Pyrenees dogs Rocky and Sydney, as well as Buster the cat.  He leaves behind his brothers and sisters as well as many nieces and nephews.

Dennis met a lot of great friends throughout his career with Winnipeg Livestock Sales and Manitoba Housing.

He enjoyed spending time with his family and friends, hosting pool parties at their home in Anola and at their cottage on Pinawa Bay.  He looked forward to the weeklong lake party in July.  We will all miss his fire side stories.

In his last few years, he devoted all his free time to his grandchildren.  They were the highlight of his life.  They loved him so much.

His last wish was to have a private celebration with the Ilchyna band playing and all the children dancing, to be hosted at a later date.

In honor of his memory, a donation can be made in his name, to the Manitoba Great Pyrenees Rescue @ mgprescue@gmail.com.

Offer Condolence for the family of Dennis Albert Ilchyna