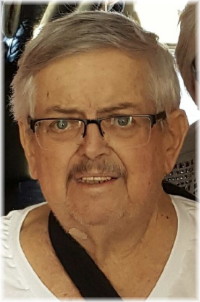 Dad was always a social person. Growing up he spent a lot of time with his cousins and often led the group in adventures of fun and trouble! One of his favorite places to play was “down the hill” in his parents’ yard. He played hockey and baseball growing up and later became an umpire.

He was always a take-charge kind of guy. He was a hard worker on the farm and took pride in his long career at Atomic Energy of Canada, which he took on when he married Maggie and they started their family (1964-1979). Nearing retirement, Dad learned the skill of locksmithing, and started the business that would keep him busy after AECL.

Dad’s leadership was apparent in his love for curling. He always skipped the team and spent many weekends “bonspielling”, making many lasting friendships and good memories, as well as bringing home trophies. So many trophies! During Dad’s younger years, much of his time was spent hunting in the fall and freezing meat for the winter, and in the summer fishing, always in pursuit of the biggest sturgeon.

Dad used to love to golf and often played with his wife Lynda, who he married in 1991. He developed a love for cooking and spent many weekends with Lynda gathering the ingredients to prepare a huge, from-scratch Chinese food feast. It was a lot of work and seemed to take forever, but it was so worth it and remains a source of many great memories. His love for cooking continued throughout his life, and was apparent by the number of recipes he collected and new culinary methods he explored.

Dad loved spending time with his dad. You could be sure to find them “in the garage” fixing neighbors’ vehicles, tractors, and various other machinery. They hunted, fished and cut firewood together. Of course, they were also responsible for readying the garden for Nanny to plant, later also building her a greenhouse in which she would spend countless treasured hours growing plants to have in her yard, as well as to sell to her friends in the community. As much as Dad spent so many hours with his dad, his mom’s interests were ingrained in him as well, as Dad took on a love for plants, and often had orange and lemon trees growing in his house, planting them from the seeds of the fruits he ate.

In the past 20+ years, dad’s time was spent focused on his grandchildren. He spent many Christmas mornings building new toys and laying on the floor playing with “the boys” (probably wishing they would be just a little less energetic!).

Although not necessarily always actively involved, he never missed an opportunity to be with his grandchildren. Whether it was in the yard watching Wyatt play, or at the beach, sitting in his chair looking on as the kids splashed in the water. As the kids grew, his favorite spot to be was at centre court, field or ice. The prime spot might as well have been designated for him (and he often joked he should put his name on it), as he arrived early enough to get “his spot” every time. We often made fun of him because of his keenness for arriving early; there was “early”, and then there was “grandpa time”.

There are memories of fishing with grandpa in his boat at the cottage.  One time in particular when Morgan caught a fish but was so scared of it, she “ran away” from it in the boat!

Dad learned new sports as his grandchildren played. Although never a basketball expert, he proudly attended Alex’s school basketball games, learning rules as it was played, so happy to be watching Alex play a game he loved.

From his lawn chair at centre field, he often watched Noah play soccer, taking an ownership of the team and feeling each win and loss as if it were his own.

He always patiently waited for his hug after the games, ready to discuss the outcome, learn the names of the other kids on the team, or ask about when the next game would be.

He loved watching Ty & Cayden play hockey; it wasn’t a game unless Grandpa was in the stands so proudly donning his team jacket with “Grandpa” on the arm. He became somewhat of a legend at those games, quickly making friends with all the parents and proudly cheering on all of the boys on the team, thinking of them all as “his” boys. When the boys moved away to play and he couldn’t be at the games, he tuned in on his computer to watch every game (he probably wore that jacket while he watched online too!).

Dad was an overall sports fan, but his favorite ones were the ones he could watch his grandchildren play. He would tell anyone who asked (and many who didn’t) about his grandchildren, going on about their many accomplishments, beaming with pride.

They truly were his greatest pride and they brought out many qualities in Dad that he hadn’t readily shown before. He always loved the hugs he got and never missed an opportunity to tell them he loved them.

Dad had a good and full life and was loved by many. He fought until the end; his stubbornness served him well until he decided it was no longer necessary. He can now rest in peace.

The family wishes to thank his doctors, nurses and homecare staff for the care they provided, with special thanks to Dr. Jonathon Laxton (his favorite doctor), his homecare nurse Gail and homecare aid Lisa, as well as Dr. Rehana Alarakhia and nurse Lynn who were truly kind, caring and compassionate during his final hospital stay. We will be forever grateful to you for helping to keep Dad comfortable and respected.

Mom (Maggie) and Auntie Brenda gave so much to Dad as his health was failing. Neither hesitated to take him to his appointments, help him get groceries or just sit and spend time with him. I know Dad appreciated and loved them both dearly.

In accordance with Dennis’ wishes, cremation has taken place.

A celebration of Dennis’ life will be arranged in the near future and we will spread the word, hoping to see his family and friends together to share memories; many hours were spent writing this, piecing together Dad’s life,  conjuring up memories of Dad and stories we’ve heard, but there is so much more to know and talk about. We would love to hear your memories of Dad! Requests for information on the upcoming event can be sent to dennisklepatz@outlook.com

Offer Condolence for the family of Dennis Alexander Klepatz