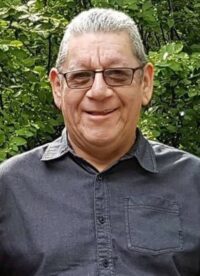 It is with profound sadness that we announce the sudden passing of our beloved Dad, Brother, and Uncle, Bradley Dennis Courchene, on Tuesday November 8, 2022.

Brad was born in Pine Falls, Manitoba to his parents Dave Sr. and Margaret Courchene. He was the second youngest of seven; Lorraine (predeceased) Art, Dave Jr. (predeceased) Orianna, Brian (predeceased) and survived by Shirley (Art), Gerald (Eve), and Darlene.

He will be lovingly remembered and greatly missed by his children; Crissy, Dustin (Alice), Erin (Daniel John), Lindsay (Brett), honorary son Michael (Shelia), and nephew, whom was like a son, Herman Jr (Chasidy); grandchildren, Jaydon, Chloe, Delson, Tahya, Adena, Brooke-Lynn, Kawhi, Charlotte; and by all who knew him.

Brad lived in his home community of Sagkeeng First Nation, throughout most of his life. In his younger years, he was the first Indigenous student to attend and graduate from St. John’s – Ravenscourt high school. Brad dedicated much of his life working on behalf of his people across Turtle Island. He was very knowledgeable, well read, a gifted writer and strong advocate for Indigenous issues. He never turned anyone away seeking his advice, guidance or support. He always shared the story, of the day, when the people came to him for help on how to create our own Laws. Through this endeavor the Sagkeeng Law Makers were developed. He worked passionately to bring about much needed change within our community. His legacy and leadership were of unity, his message was of love and peace.

Brad was a free and adventurous spirit, he was a commercial pilot, skydiver, who enjoyed listening to a wide array of music; he was very capable of cooking at a level of a well-trained chef and was constantly trying out elegant recipes and sharing them with family and friends. Brad loved to read, watch his favourite television shows or YouTube videos, and listen to his music loud. Most of all he loved his family whole heartedly and inspired his children, grandchildren, and others to always be fearless and follow their dreams and hearts. Brad was an inspiration and an example of what it meant to be Indigenous – free and someone who believed in Indigenous rights and true Indigenous sovereignty. Brad will be greatly missed by all who loved him dearly. May he rest in peace…no regrets dad, no regrets.

Wake services will be held at Brad’s home from Saturday, November 12th, 4pm to Tuesday November 15th, 2022, 1pm. Funeral service and feast will be held at the Turtle Lodge in Sagkeeng First Nation, at 2:30pm with a one hour viewing prior to the service. Pallbearers will be Herman (Nephew), Daniel John (Son-in-law), T-Dre (Nephew), Jaydon (Grandson), Delson (Grandson), and Michael (honorary son). Honorary Pallbearer will be Brett Cook.

Offer Condolence for the family of Dennis Bradley Courchene