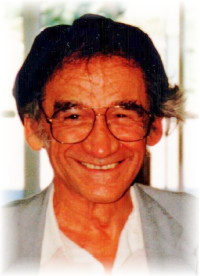 Don passed away peacefully at his home, on his own terms, in Lydiatt, Manitoba on February 4, 2015.  Don was born on the family farm in Lydiatt November 19, 1926 to the late Gordon Reeder James and the late Margaret Suzanne James (nee Small).  He lived 85 of his 88 years on this same farm.

The course of Don’s life was deeply affected when he was stricken by polio as a very young boy.  He was left with a deformed arm and his health was never again robust.  Don said that he developed his love of words, of books, and of poems largely as a result.  Throughout his life he felt a deep affinity for the downtrodden, the disadvantaged, and of course the handicapped. He also had a great distaste for bullies having suffered deeply himself.  In any contest that he witnessed, he was always on the side of the underdog.  Being a man of little material means, he nevertheless gave generously to his friends and charity from what little he had.  His generous heart would not let him do otherwise.  If he found someone had taken advantage of him, he fought against bitterness, saying the shame was on them and he would not let it alter his world view.

Don had an abiding love for Mother Nature and other than a brief stint in Winnipeg delivering telegraphs on his bike as a young man, followed by a couple of years in Vancouver, he was able to remain on the farm for his entire life.  After his father passed, he was a great comfort to his mother.  When her health began to fail he took over the household chores and duties which enabled her to stay at home for many years longer than she otherwise could have.  With his disability he could have easily refused the burden of this responsibility but he would not hear of it.  “She looked after me when I was a child” he said “and now it is my turn to look after her”.  Those were very difficult years for him but never did he shirk from his self-imposed duty. Only when he himself was on the point of collapse from exhaustion, did he accept that it was time for outside assistance.

Don was well known in the local community during the many years he wrote a weekly article for the local paper about local news, and his coverage of the weekly local magistrate’s court in Beausejour.  But he was most well-known for his poems.  The paper frequently published them and he became known as “Don, the poet”.  To be recognized as a poet, a weaver of words, was to him, the greatest achievement he could hope for.  There was nothing that pleased him more than when someone commented favorably on one of his poems.  Don’s poem “Lydiatt S.D. 1199” was made into the National Film Board short animated film “Though a Broken Pane” in which he did the voice over.  Several books of his poems were published:  Poems Are For People, The Jesus Poems, and Amadeus.

Don was a sweet and gentle soul with a deep love of knowledge.  He was forever curious about the world around him, how things worked, and what made people tick.  All his life he retained a child’s curiosity and wonder about the world around him.  He was a wonderfully self-educated man, and in particular he had a deep understanding of philosophy and history.  He loved to discuss these subjects as well as politics, current events, and sports especially the CFL.  If the discussion happened to occur over a glass or two of beer, so much the better.  He rarely took the opportunity to show off the depth of his own knowledge, he was always more interested in what others were thinking and why.  He always had time for others, even when he was sometimes perplexed by the “hurry-scurry” of the world around him.  He was not a collector of things or of material wealth, (he had little of either), but he did have an extensive private library of the world’s classics.  He collected knowledge.  It sometimes seemed that he had an appropriate quote from a classic book for any occasion ready on the tip of his tongue.  He loved puns and he could not resist a play on words whenever the opportunity presented itself.  He had a playful sense of humour that was always close to the surface but that was never biting or hurtful.  He would often make fun of himself, but not of others.

Despite the physical and material challenges and restrictions of his life Don lived life on his own terms.  Deeply committed to the truth as he saw it he was always honest, and forthright in his dealing with others.  His was a tolerant, forgiving, and generous soul, and in his own way, he tried to make the world a better place through his kindness and respect towards others, but mostly through sharing his truths with us all through his written words, his art, and his beloved poems.

Don will be sorely missed by those who knew him best and loved him most.

Cremation has taken place.  A memorial service will be held at St John’s Lutheran Church of Lydiatt on Friday, the 13th of February at 2:30 p.m.

Offer Condolence for the family of Don Trent James