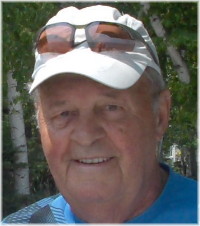 On Friday, April 13, 2018 at the age of 84, Don passed away peacefully at the Beausejour Hospital surrounded by his beloved family. He will be forever remembered by his wife Dale of 58 years, his wonderful daughter, Darlene & son-in-law Dr. Fred Zeiler, grandsons Dr. Fred A. Zeiler (Kait) & Dr. Matt D. Zeiler (Lisa). Don was predeceased by his father Jim, mother Bertha & brother Doug.

Don began his career at MTS in 1954 & retired as General Manager Directory 37 years later in 1991. He was highly respected at work & had a positive impact on  his co-workers & made many long time friends. It was at MTS that Don met &  married Dale the love of his life in 1960. Shortly thereafter they were blessed with their wonderful daughter, Darlene. The family was complete when Darlene married Fred & they gave us two very special grandsons, Fred & Matt. Don’s favourite place was the cottage at Brereton Lake in the Whiteshell. He & Dale loved to welcome family & friends through the 40 years they owned the cottage. Many wonderful times were spent together, boating, swimming, water skiing, enjoying the scenery along with good food & conversation. Don’s two grandsons were his pride & joy. He spent countless hours driving the boat so they could water ski, go tubing & swim off the high rock. Don got them started playing golf & along with Dale followed their basketball career at school & throughout Manitoba. Don enjoyed hunting, fishing & curling in his early years but in his retirement years golf became his passion. He enjoyed practicing, playing, trying out new clubs & balls & loved to play with his friends Don, Mike & Neil. Don & Dales early retirement years were enjoyed in Florida for 9 winters, as well as several Caribbean cruises, topped off with a 50th anniversary cruise from Quebec City to New York in 2010.

The family extends a heartfelt thank you to all our friends & family for  their love & support during this difficult time.  The family would also like to give a special thank you to Dr. Schmidt & the excellent nurses & staff at the Beausejour Hospital for the care & compassion they gave Don in his final days. We would also like to thank Rhonda at Sobering Funeral Home for her comforting words & special attention. Thank you to Dr. N. Reshia & staff of the St. Norbert Clinic for their excellent care over the past 4 years.

Cremation has taken place & in keeping with Don’s wishes no formal service will be held. The family is having a private memorial service this summer at the lake.

If friends so desire  memorial donations may be made to “The Humane Society” 45 Hearst Way, Wpg,MB,R3T0R3 or Manitoba Camping Association and Sunshine Fund (for underprivileged children) 960 Portage Ave.,Ste 302 , Wpg.,Mb, R3G0R4 .

Don would like family and friends to remember only the good times with him and to think about the following: Cherish Yesterday, Dream Tomorrow, Live Today

Offer Condolence for the family of Donald Gordon Turner