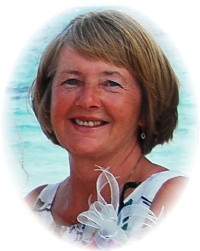 After a long and bravely fought battle with cancer, Donella passed away peacefully at home on July 21, 2013 with friends and family at her side.

Donella was born in Dingwall, Scotland.  She grew up in Duartbeg, a remote sheep farm on the northwest coast of Scotland with her father.  Donella went on to complete her nursing training before traveling to Canada with a friend.  In 1973, it was there that she met Finlay MacInnes, who she married in 1975 and made Canada her home.

Donella and Finlay started out their lives together in Gillam, MB.  Finlay’s work saw them moving all over the north during the earlier years in their marriage including Grand Rapids, Thompson, Laurie River, and Arborg before make their way back to Gillam in 1989 where they stayed for 11 yrs.  In 2000 they moved and bought their retirement home in Lac du Bonnet, where Donella remained until her passing. Retirement saw her indulging her hobbies; she was an avid reader, gifted wood worker, took great pride in her garden and cherished her new role as a granny.

Donella had a 30 year career as a nurse, taking her through various specialties including; pediatrics, geriatrics, emergency, and management, before finding her passion in the operating room.  Donella retired in 2007, splitting her time between their home in Lac du Bonnet and joining Finlay in their home in Gillam while he continued working.

Donella was predeceased by her mother Isabella at the age of 12, and her father Peter MacLeod, both of Scourie, Scotland.  She is survived by her loving husband Finlay and their three children; Jonathan (Sarah) of California, Susan (Duncan) of Calgary, and Roy (Angela) of Gillam, as well as her three grandchildren Cailee, Abby, and Parker, who loved their granny so much.

Donella had great faith in her Lord, which was quietly shown in her daily actions.  Donella’s passing leaves a sad gap in the lives of all who knew her.  She was a great friend, loving wife and mother and an amazing granny.  She will be greatly missed.

Donella’s ashes will be laid to rest in the Beausejour Cemetery with her in-law’s Gordon and Margaret MacInnes,   whom she loved deeply.  Special thanks to Dr. Bruneau and CancerCare Manitoba.  Memorial Service will be held at 11:30 a.m., Saturday, August 24 at Great Falls Community Hall.

Offer Condolence for the family of Donella MacInnes