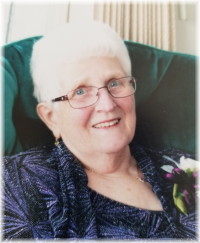 Our hearts are breaking. On November 2, 2020 our loving mother and Nannie went to be with her husband Richard.

Dorothy was born in Winnipeg on February 12, 1933 to Richard and Constance Hobley.  She grew up on Home Street with siblings Connie, Mary, John, Bill and June.  The Hobleys instilled in their children the value of a dollar and the importance of family.

As a young working woman, Dorothy’s frugal ways served her well, feverently socking away her secretarial earnings for the $25 purchase price of a back lot at Gull Lake.  Ever determined, this was quite the accomplishment for a single woman in the 1950’s.

Gull Lake is where the courtship of young Dorothy and Richard Steinke began.  They married in 1955 and put down roots in Pine Falls raising Marilyn (Barry), Murray (Susie), Barbara (Allan), and Michele (Mike).  The Steinke children took pride in modeling their mother’s hand sewn and freshly pressed creations. From church clothes and recital costumes to crocheted aphgans and knitted socks, their mother’s talents were on display.

Married for 53 years, Dorothy and Richard were quite the pair.  Dorothy liked things done promptly and properly and Richard’s patience qualified him as just the man for any job required by his ‘Chicken Boss’  AKA  ‘Professor’.

For Dorothy, it was her role as Nannie that filled her heart. Her grandchildren could count on her to ensure they were doted on daily, attended church weekly, and tuned in to The Queen’s Christmas Message annually.  Deanna (Rodney), Alana (Nikolai), Erica (Randolph), Chad, Carter (Brigitte), Shane, Evan and Ryan looked forward to Thanksgiving suppers in the toasty garage with the Horn of Plenty front and center.  Easters brought cut throat Easter egg hunts.  The grandchildren frequently tried to decipher her shorthand and sneak a few mouthfuls of mac ‘n cheese before it was served.  Dorothy’s great-grandchildren will remember her as a bingo-playin’ casino-goin’ Nan who never missed sending a birthday card filled with cash.  Brenen, Abbey, Mason, Myles, Alexis, Cate, Cameron, Niko and Audrey loved their Nan so much.

A special thank you to Helen Hobley and Linda Eori for the numerous lengthy phone calls over these last several years, especially since Richard’s passing in 2009.

A family service will take place at Notre Dame du Laus Cemetery at a later date.

In life we loved you dearly

In death we love you still

In our hearts you hold a place

No one else will ever fill