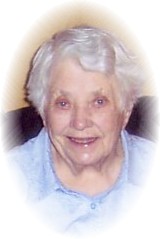 Our loving mother passed away peacefully in the late afternoon of November 21, 2010 at the Kin Place Personal Care Home in Oakbank, MB with members of her family by her side.

Mom was predeceased by her infant son Richard (1942), her husband Homer (2006), parents Gilbert and Evelyn Williams and sister May McKinnon.

Mom was born in Winnipeg and was raised and educated in Minto, MB. In 1939 she met her husband to be Homer Rivest and they were married in 1941. Mom and Dad initially lived in Minto until 1945 when they moved to Winnipeg and later moved to Anola, MB in 1983.

In her early years, Mom worked at the T. Eaton Company. From there she was employed at Silverwood Dairies and lastly at at the Health Sciences Centre from which she retired in 1986. Mom was very involved in the St. Vital United Church until her retirement.

Mom loved to do crafts, handwork and gardening. She loved to engage in conversation with anyone that was willing to listen. She will be greatly and dearly missed by her family and those who knew her.

Our sincerest thanks to all of the nurses and staff at the Kin Place Care Home for providing such loving care to Dorothy.

Mom would have been please to know that in lieu of flowers, donations were made to the Alzheimer’s Association.

The family held a private memorial service at the Oakbank United Church.

Offer Condolence for the family of Dorothy Marie (William) Rivest