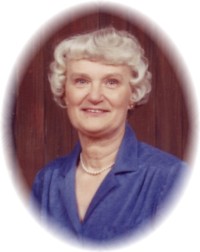 Edna Fortier left this life peacefully on Oct 18, 2012 after living many years with illness in dignity and grace. Born Nov 14, 1924, in Emerson, Manitoba   where she grew up on a Depression-era farm with her parents (Albert & Hulda – deceased (d)), her sisters (Della, Martha (d)), and her brothers ( Walter (d) and Cliff (Mary)).

A woman who sought learning wherever she could find it, she eventually left to work for the Manitoba Telephone System as operator in Roland and Morden, MB.   Her arrival in Pine Falls in 1951 changed her life.  With encouragement from friends (Son & Donalda (d)) she met and married Thomas deBlois Fortier and went on to have 3 daughters:  Verla (sons Max and Jesse); Patricia (Paul D.); and Gail (Paul  V., children Blythe and Tommy).  Her home was welcome and joyous even as she nursed Tom through his long illness.  She cared in their last days for her mother, Hulda, and her father-in-law, Tom Fortier Senior. She also offered a home to Gail and her children in the first years of their new lives. She was close to her nieces (Elaine (Dale), Lorraine (d)) and nephews (Ronnie (d) (Marie),  Dennis (Margaret), Greg (d),  Larry (Doris).  Her Annapolis Royal, NS family included Tom’s ‘adopted’  brother  Ray (Eileen).

Her adventurous spirit led her to happy travels in Kenya, India, Central America, the USA and every festival in Manitoba.  A constant friend to neighbour and stranger, her selfless acts of kindness were many.  As Mom and Nana, she was a model to her children and her children’s children of generosity, strength and love.  Edna also gave to her community of Pine Falls, being life member of the Royal Canadian Legion, past president of the Curling Club, first woman member of the Church of the Advent vestry, member and former Worthy Matron of the Order of the Eastern Star, as well as volunteering in the hospital and in the personal  care home.

Contributions can be made in her name to the Sunnywood Personal  Care Home, the Pine Falls District Health Foundation,  the Multiple Sclerosis Society of Manitoba or the Alzheimer’s Society of Canada.  Our gratitude goes to all who supported her including friends, the home care ladies and the extraordinary staff at the Sunnywood Personal Care Home.

A Christian who was unafraid of death, may she be restored and rejoicing now.  All were welcomed at a memorial service to celebrate her life at 11 a.m. Dec 20, 2012 in the Pine Falls United Church.  Cards and letters will be received at her former address and post box.

Offer Condolence for the family of Edna Fortier