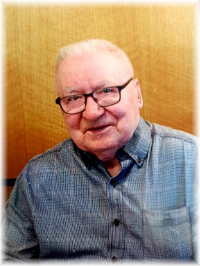 Edward Mazur passed away peacefully in the early morning of Saturday, January 18, 2020 at East-Gate Lodge in Beausejour at the age of 90, reaching another one of life’s milestones.

Ed was born in the RM of Brokenhead, Manitoba on December 14, 1929 to John and Katherine (Woloshyn) Mazur. Ed was predeceased by his wife Emily (Marek). He is survived by his daughter Jo Ann (Ray) Klimchuk and son Vern (Chantal) Mazur, granddaughters Jamie (Ryan) Keey, Tara Klimchuk and Sydney Pelshea-Mazur. Ed is also survived by great-grandchildren James and Robbie Keey and numerous brothers, sisters, nieces and nephews.

Some of Ed’s fondest memories were spending time with friends and family out at the farm. He was a hard honest worker doing various jobs throughout his life with some taking him as far away up North as the DEW Line. He was passionate about music and wrestling.

A special thanks to all the staff at East-Gate Lodge for their compassionate care.

As per Ed’s wishes a service will not be held at this time.  Family and friends will gather in June for his celebration of life.

Offer Condolence for the family of Edward “Ed” Adolphe Mazur