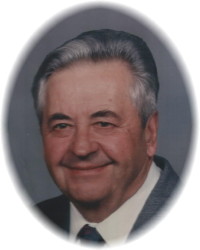 It is with sadden hearts that we announce the peaceful passing of our beloved husband, father, grandfather and great-grandfather, Edward at the age of 86 years on September 27, 2015 at Eastgate Lodge, Beausejour, MB.

Dad was predeceased by his parents, Steve and Mary and his sister, Rita and brother-in-law, Paul Kazina.

Born and raised in Ladywood, MB.  Dad loved the land, animals and music, but besides mom, the farm was still his first love.

Dad and mom were married on September 12, 1953 and began their family shortly after.  Dad worked alongside his father, Steve until his health began to fail at which time dad took on the responsibility of the family farm.

Dad always worked hard to provide for his family.  In the early years he worked in the bush camps in the winter where he cut his own lumber for their home and very first machine shed.

Even though Dad’s greatest pride and joy was his family, he also had a passion for music.  At the young age of 16 years he started playing the drums for the Melodiers and continued to play well into his sixties.  His band had played at many weddings, social events and legion branches.

The family would like to express their appreciation and heartfelt thanks to the staff at Eastgate Lodge for the compassionate care given to our dad for the past 2 ½ years.  A special thank you to Lilly, Angie, Robyn and Lois.

Funeral service will be held at 11:00 a.m. on Saturday, October 3, 2015 at Sobering Funeral Chapel in Beausejour, MB, with viewing 1 hour prior.  Pallbearers will be all six of Dad’s grandsons.

Offer Condolence for the family of Edward Steve Peluk