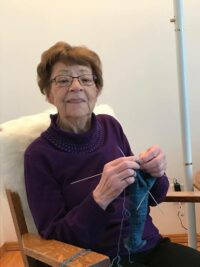 It is with heartfelt sorrow that we announce the death of our mother, Elaine Marie Strandlund, nee Reeve on Thursday, November 26, 2020 in Pinawa, Manitoba at the age of 82. Elaine was born in Broadview, Saskatchewan on October 19, 1938 to Reginald and Edith (Deacon) Reeve.

Elaine grew up on a farm near Oakshela, Saskatchewan. In grade 9 she moved to Grenfell, Saskatchewan to live with her Grandma Reeve, then to Regina, Saskatchewan where she lived with her best friend from high school and trained as an X-ray and Lab Technician. This field would become her vocation until her retirement.

Elaine found her first job in Île-à-la-Crosse, Saskatchewan, then worked in Baldur, Manitoba, making lifelong friends each place she went. On February 22, 1964 she married Roy Strandlund and moved to the family farm near Broadview, Saskatchewan.

Their family grew with the arrival of first-born Susan in December 1964, Cameron a year and a half later, and Leslie two years after that. While lovingly mothering her children, working as a lab technician, and farming with Roy all other hours of the week, Elaine still found time to overcook poultry and beef, make Thanksgiving meatloaf, and ensure each of her children were entirely self-sufficient.

In 2007 she moved to Pinawa, Manitoba where her youngest daughter lives.

She joined in the Pinawa community with quilting club, knitting club, Book club, and Pinawa Lutheran church. Elaine enjoyed having her cottage at Crooked lake, so she could keep in touch with her Broadview friends.

Known for her acerbic wit and forthright honesty, Elaine was an entertaining conversationalist and enjoyed deprecating herself and those around her. Friends and family were very important to her, and she was always the first to offer a helping hand. She felt blessed to work many years alongside close family friend and neighbour Corinne Markwart (Johnson). She was steadfastly supportive of her mother and “the old people” (Roy’s Aunts and Uncles), and kept in touch will all Roy’s and her relatives.

Elaine, never one to shy away from hard work, forever had a project on the go, whether farming, helping someone paint a room or four, refinishing a floor, digging a utility trench to a garage at 64 (calling her son to report progress every 100 shovelfuls) or crafting (painting, ceramics, knitting, crocheting, and quilting).

Elaine is predeceased by her husband, Roy Strandlund, her parents, Edith and Reg, her brothers Murray, Lyndon, and Donald.  She leaves to mourn: Her children: Susan Wonko (Strandlund) (Neil, Connor, and Mark), Cameron Strandlund (Nicole, Jared, and Sean), and Leslie Strandlund (Blair Skinner, Brett, Jeffrey, Mats, and Blaze), and her brother Robert Reeve.

“Granny” enjoyed spending time with her grandchildren. Whether it was making teepees or cookies, reading books, pulling a sled, playing cribbage, or chasing them with a flyswatter when she thought they needed it. She was blessed to hold her new great grandchild, Carla Wonko (Connor and Becca Wonko)

Due to the ongoing global pandemic, there will not be a service until it is safe to do so.

Eventually, she will be interred with her husband at the Percival Cemetery near Percival, Saskatchewan.

Offer Condolence for the family of Elaine Marie Strandlund