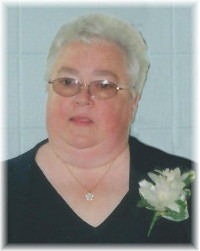 It is with profound sadness that we announce the passing of our Wife, Mother, Nana, Sister, Aunt and Friend, Eleanor Zieske, peacefully with her family by her side, Saturday, March 2, 2019 at the Grace Hospital.

She is predeceased by her parents, in-laws, three brothers, one brother- in-law, one sister-in-law and a nephew.

Mom was born in Winnipeg, MB on January 24, 1948.  She spent her early years in La Riviere, St. Andrews, MB, and Toronto, ON with her parents.  She moved back to Winnipeg and lived with her Mom until she passed.  At 12 years old, she moved in with her brother Bill and sister-in-law Phyllis to live with them and receive her education, as well as help raise her nephews.  When she left school, she started to work at Eaton’s Department Store in Winnipeg with her brother Bill.  There she met Betty Kabaluk.  Mom made frequent trips on the weekend to Beausejour to visit the Kabaluk’s, and through them, mom met and created life long friendships with people in the surrounding area.  This is when mom met Dad in 1969 at the “Oh so Popular” Poplar Park Dance Hall.  Mom and Dad got married in 1973, lived in Winnipeg initially, then moved and eventually settled in the Beausejour area in 1974, where they set their roots.

Mom worked at various jobs for the first few years that they were married until she had their children.  She stayed at home and raised the children while continuing to work at several jobs including:  daycare, Tupperware, Amway, and completing personal income tax for friends and family.  She also served on the Minor Hockey League Board and served on the Church Council.

In 1987, Mom decided to go back to school to become an Educational Assistant.  This began her career with Agassiz/Sunrise School Division which spanned from 1988-2010.  She worked as an EA with children who had extra needs in Tyndall, Beausejour and Greenwald Colony.  Because of her passion for education and learning, she decided to run for School Trustee in 1995, which was a position she held from 1995-2010 and was Chairperson of the School Board for many years.  She played an integral part in the amalgamation of the school divisions, striving to make the new Sunrise School Division a prosperous, positive, school community and she was very proud of this.

Because of her love for learning, Mom decided to go back to school and earn her High School Diploma.  She started in 2006, taking various grade 11 and 12 credits until she graduated in June of 2010 at 62 years of age.

Mom established her connection with the Greenwald Colony through the Zieske family when she moved to Beausejour.  Her bond with the colony became stronger when she worked as an EA during her Agassiz days.  The colony was Mom’s second family.  She enjoyed visiting there for hours whether it be for songs, the homemade food, or the laughter.

Mom loved socializing with family and friends spending many hours’ playing cards and games.  They always had people over at their home or were visiting others.  She enjoyed her bus trips to the states whenever she could go.  Many good laughs were shared and stories were told.  Mom was always the jokester.  Her mottos, “We will agree to disagree”, and “Stand up for what you believe in, even if it means standing alone”, were words Mom lived by.

Mom’s greatest struggle began in 2012, when she started to lose her eye sight, which she knew entailed losing her independence.  Even though she was blind, she was strong, resilient, determined and just plain stubborn.  She would not let this disability get her down.  She remained active on the Board for the Beausejour Handi-Van where she ended up being President, looked forward to the Adult Day Program, loved to listen to audio books and continued to take gambling trips with her friend Norma, whenever she could.  Mom never let her blindness stop her from doing anything she enjoyed doing.

Mom’s greatest joy was watching her grandchildren grow.  She took part in as many activities as she could and she was their greatest supporter.  Nana was always there to give advice, to tell a story, sew costumes, volunteer for school trips, and hang out with her grandkids.  She loved and cherished them dearly.

An excerpt from Mom’s own essay written for her to graduate reads, “Upon reflection, my expectations of myself have changed.  They are higher, which means, that even when I do not meet my new expectations, I find that I have still accomplished a lot.  Here I am, Eleanor Zieske, wife, mother, Nana, friend, school trustee, volunteer, leader, student, graduate,……WINNER!!!!”

The family would like to extend their extreme gratitude to the EMS, Homecare Workers, Nursing Staff and Doctor’s at the Grace Hospital and Beausejour Hospital for their compassion and support they showed mom and us.

A celebration of life will be held on Saturday, March 9 at 11:00 a.m. at Sobering Funeral Chapel, 1035 Park Avenue E., Beausejour.

In lieu of flowers donations can be made to Beausejour Handi-Van, CNIB, Canadian Diabetes Association.

Offer Condolence for the family of Eleanor Zieske (nee Milne)