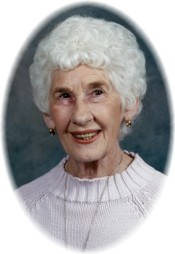 On Wednesday, April 27, 2011, Elna left to join her beloved husband, Ross, whom she has missed for the past 17 years.

Elna was born in 1922 to Emma Anderson and Carl Gustave Carlson at Winnipeg Beach, MB. She received her entire education in Winnipeg, graduating from St. James Collegiate in 1938. After a post-secondary education, she entered the work force. Her career spanned many enjoyable years with the Provincial Government in Winnipeg, with the Bank of Montreal in Souris and with Atomic Energy of Canada Ltd. in Pinawa. Her places of employment gave her the opportunity to meet many interesting and wonderful people, many of whom have remained friends to this day.

She and Ross were married in 1948 and moved to Souris in 1950 to run the drugstore. They were very involved in the community and Ross especially enjoyed working with the high school football team. Elna thought of the team as her team too. In 1970 they bought the drugstore in Pinawa and quickly became very heavily involved in their new community. Elna’s involvement continued right up until April 27 of this year.

Her love of dancing never waned. One wouldn’t bother calling her house when Dancing with the Stars was on because she wouldn’t answer the phone anyway. She was a very accomplished dancer herself, having won many contests. Jitterbug was her “signature” dance back in the day. One summer in Clear Lake she attended 14 dances in 14 nights. It was no wonder that she was always so eager to start working on organizing the AECL R&D Christmas Dance every year. She wanted to get out there and dance.

After retirement her love of books led to many volunteer hours with the Pinawa Public Library. She spent several years actively participating in and enjoying curling and golf. She was an avid spectator of all sports but especially of football and baseball. A love of travel took her and Ross to many exciting places, including several return visits to Hawaii and some rollicking times in Las Vegas. After Ross’s passing she enjoyed many fantastic adventures with great friends.

Friendship was highly valued by Elna. How many people maintain friendships for over 70 years? In her words, “I am so grateful for the delightful inherited children and grandchildren who brought endless joy and happiness into our lives, as well as for the many wonderful friends with whom we were truly blessed.”

She was adored by her neighbours. Always thrilled to greet each new baby as they arrived on Byng Cresc., she was sorry to have missed meeting the Bilinsky grandbabies. She had very special relationships with young people. From the neighbourhood kids, to the students who worked at the drugstore, to the Ward boys who lived with them while going to school – she truly admired them all and took great pride in their accomplishments. She was especially proud of “her boys”, Brent and Tim Stokes. When they moved from home, she missed the hockey games in her basement with Tim and the cribbage games with Brent. You can imagine her delight when Brent agreed to buy her home once she knew that she could never live there again. “Everything has fallen into place”, she sighed.

The town of Pinawa will never have as great an ambassador as Elna. She loved the town and was very boastful about it wherever she travelled. Elna loved the deer that were so content to hang around her yard. She felt honoured that she was often the first to see their new offspring every year. “You must be a special human being if an animal trusts you with their young.” We all know what a special human being she was.

Elna was predeceased by both of her brothers, Anders & Bill, and her sister, Irene. She is survived by Irene’s children, Laurene and Graham and also survived by Bill’s children Linda, Larry and Eric. Ross’s sister Mary is living in Vancouver.
“Thank you to all the staff at the Pinawa Hospital who showed care and compassion and treated me with dignity and respect in these final days of my life. I also very much appreciated the kindnesses extended to my dear friends who were constantly at my side.”

Cremation has taken place. A gathering of friends will be held at a later date.

Offer Condolence for the family of ELNA GRANT